The expansion of an economy in order to produce more goods and services for a specific period of time is known as economic growth. This is an outward shift of the possibilities for production in an economy. 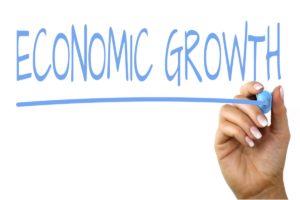 There are different maximum possibilities of two goods when it employs all the available resources fully when given the existing state of technology shown by Economic growth.

There have been various methods proposed for measuring economic growth. One of those methods includes measuring the overall capacity of a country to produce goods and services. Also, the money value of GNP can change with the change in prices.

Thus, it becomes necessary to measure economic growth using real income or constant rupees. There can be an increase in GNP if it is followed by a higher rate of a growing population. This may lead to no change or deterioration in the living standards of the people.

Thus, real GNP per capita is measured when real GNP is divided by the population. So, when the numerator grows faster than the denominator, the real GNP for capita will increase. Along with this, the quality of life will also improve.

There is various competition using which economic growth of a country is measured. These are the size of a population, percentage of a population that forms labor, the number of labor hours that are actually worked by labors, and labor productivity.

The size of the population helps when the demand is enlarged. Thus, it paves the way for producing more quantity of output. Also, L/P which is a fraction of the population that forms the labor force will be high when the productive capacity of an economy increases.

Also, the total number of labor hours is the length that the actual average labor has worked. Thus, it has a direct impact on the economic growth rate. Also, labor productivity is said to have a direct bearing on the GNP level. The more productive a labor will be, the more will be the total output in the industry.

The Relation between Growth and Stability

Financial stability is a must for economic growth. Because a stable economy can help in forming the capital due to the continuous flow of foreign income. Furthermore, stability in an economy is necessary for a rapid rise in productivity. Also, when the prices are stable, companies can make ‘easy’ profits.

Furthermore, they can repay their debt when the currency depreciates. Thus, there needs to be an existence of the well managed financial institution. This can easily quicken economic growth. So, this is done by mobilizing the savings for purposes like investments.

When the businesses are run in a capitalistic economy it is likely to have ups and downs. These fluctuations that take the shape of a wave are known as the business cycle or trade cycle. There are 4 phases through which trade cycles are passed. They are prosperity, recession, depression, and recovery.

Q. The economic growth in India is possible only when there is a

B. Technical progress of the global economy

Share with friends
Previous
Devaluation of Currency
Next
Exchange Rate

why is personal income not taken into national income?

Bcz it is counted only one time and is counted in boss’s expense.
And according to boss it is expense and our’s income.
So personal income is not taken in national income

what is boss expence

It’s is taking into national income, it just depend on the approach you’re using, if you’re using an income approach (reward of factors of production) in getting your GDP, then all income at personal (reward for labour= wages and salaries), firm(interest, profit, dividend and undistributed profit) and govt level (this will be gotten when you get you calculate for your NI= NNP-(indirect business tax+subsidies) will be added together.

we use personal income on our on

what are the purpose of measuring national income for a country ?

To determine the growth of country