What do you mean by the medieval world? Literally, yes it means the Middle Ages. But, what else do you know about it? Typically, people use the phrase “Middle Ages” to describe Europe between the fall of Rome in 476 CE and the beginning of the Renaissance in the 14th century. Historically, the term implies that the period is an insignificant blip sandwiched between two much more important epochs. So, what all happened in this period? Let us see!

Birth of an Idea: Renaissance

The phrase “Middle Ages” tells us more about the Renaissance that followed it. Starting around the 14th century, European thinkers, writers and artists began to look back and celebrate the art and culture of ancient Greece and Rome.

One Small Trivia for You

Between 1347 and 1350, a mysterious disease known as the “Black Death” (the bubonic plague) killed some 20 million people in Europe—30 percent of the continent’s population. It was especially deadly in cities, where it was impossible to prevent the transmission of the disease from one person to another.

This way of thinking about the era in the “middle” of the fall of Rome and the rise of the Renaissance prevailed until relatively recently. However, today’s scholars note that the era was as complex and vibrant as any other.

After the fall of Rome, no single state or government united the people who lived on the European continent. Instead, the Catholic Church became the most powerful institution of the medieval period. Kings, queens and other leaders derived much of their power from their alliances with and protection of the Church.

The Rise of Islam

Under the caliphs, great cities such as Cairo, Baghdad and Damascus fostered a vibrant intellectual and cultural life. Poets, scientists and philosophers wrote thousands of books. 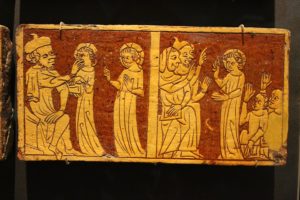 Towards the end of the 11th century, the Catholic Church began to authorize military expeditions, or Crusades, to expel Muslim “infidels” from the Holy Land. Crusaders. They wore red crosses on their coats to advertise their status, believed that their service would guarantee the remission of their sins. They also ensured that they could spend all eternity in Heaven.

The Crusades began in 1095, when Pope Urban summoned a Christian army to fight its way to Jerusalem and continued on and off until the end of the 15th century. No one “won” the Crusades; in fact, many thousands of people from both sides lost their lives.

Another way to show devotion to the Church was to build grand cathedrals and other structures such as monasteries. Cathedrals were the largest buildings in medieval Europe. They were built at the centre of towns and cities across the continent.

Between the 10th and 13th centuries, most European cathedrals were built in the Romanesque style. Romanesque cathedrals are solid and substantial. They have rounded masonry arches and barrel vaults supporting the roof, thick stone walls and few windows. (Examples of Romanesque architecture include the Porto Cathedral in Portugal and the Speyer Cathedral in present-day Germany.)

Around 1200, church builders began to embrace a new architectural style, known as the Gothic. Gothic structures, such as the Abbey Church of Saint-Denis in France and the rebuilt Canterbury Cathedral in England, have huge stained-glass windows. They also have pointed vaults and arches (a technology developed in the Islamic world), and spires and flying buttresses.

In medieval Europe, rural life was governed by a system scholars call “feudalism.” In a feudal society, the king granted large pieces of land called fiefs to noblemen and bishops. Landless peasants, serfs, did most of the work on the fiefs.

They planted and harvested crops and gave most of the produce to the landowner. In exchange for their labour, they were allowed to live on the land. They were also promised protection in case of enemy invasion.

Question: Write a note on feudalism in the 11th century.

Answer: During the 11th century, feudal life began to change. Agricultural innovations such as the heavy plough and three-field crop rotation made farming more efficient and productive. Therefore, fewer farm workers were needed. But, thanks to the expanded and improved food supply, the population grew.

As a result, more and more people were drawn to towns and cities. Meanwhile, the Crusades had expanded trade routes to the East and given Europeans a taste for imported goods such as wine, olive oil and luxurious textiles. As the commercial economy developed, port cities in particular thrived. By 1300, there were some 15 cities in Europe with a population of more than 50,000.

In these cities, a new era was born: the Renaissance. The Renaissance was a time of great intellectual and economic change, but it was not a complete “rebirth”: It had its roots in the ages of the medieval world