The modern world history, the modern era or the modern period is the global, linear, historical-geographical approach to the time frame that comes post the classical history. Perhaps, this view is in contrast to the non-linear or rather the organic view of history which was initially put forth by the famous historian and philosopher Oswald Spengler in the early 20th century. 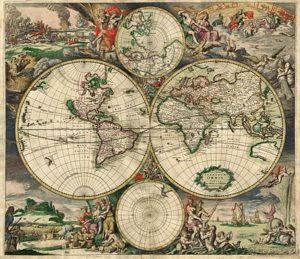 We can divide the modern history into three main periods i.e. the early modern period, the late modern period and the contemporary history.

The early modern period began approximately at the beginning of the 16th century. In this period, the major historical milestones include the Age of Discovery, the European Renaissance as well as the Protestant Reformation.

On the other hand, the late modern period started in the mid of 18th century. The American Revolution, the French Revolution, the Great Divergence, the Industrial Revolution and the Russian Revolution happened in this period. Primarily, it took most of the human history up to the year 1804 for the population of the modern world to reach its 1 billion mark. However, the next billion came just over a century later in the year 1927.

The contemporary history includes the span of historical events starting from 1945. These events are most relevant to the present time and scenario. Many historians describe the early modern period as the time frame between 1500 and 1800. This period mainly follows the Late Middle Ages period. Further, it is marked by the initial European colonies, beginnings of recognizable nation-states as well as the rise of strong centralized governments.

Impact on the Modern World

In the Ottoman Empire and Africa, the Muslim expansion took place in East and North Africa. However, in West Africa, several native nations existed. The civilizations of Southeast Asia and the Indian Empires played a pivotal role in the spice trade. In the Indian subcontinent, the presence of Great Mughal Empire was strong. Moreover, the archipelagic empires, the Sultanate of Malacca and later the Sultanate of Johor, exercised power over the southern areas.

In the Americas, Native Americans started a huge and distinct civilization which included the Aztec Empire and alliance, the Inca civilization, the Mayan Empire and cities, and the Chibcha Confederation. However, in the west, the European kingdoms and movements were in a movement of reformation and expansion. Russia made its way to the Pacific coast in 1647. It went on to consolidate the control over the  Russian Far East in the 19th century.

The religious trends of this period witnessed the rise of the Muslim community and the Muslim world. Christians and Christendom saw the end of the Crusades. Religious Unity under the Roman Church came to an end. Moreover, in this period, the Inquisitions and Protestant reformations also took place.

Also during the early modern period, people witnessed the age of discovery and trade. This happened as a result of the collective effort of the Western European nations. Portugal, Spain, the Netherlands, the United Kingdom and France went on a colonial expansion. These nations took possession of lands and set up colonies in Africa, southern Asia, and North and South America. Turkey went on to colonize Southeastern Europe, and parts of the West Asia and North Africa. Russian on the other hand, took possession in Eastern Europe, Asia, and North America.

The major changes witnessed in the centuries before the 19th were mainly associated with the ideas, religion or military conquest, and technological advancements. However, all these things had a very little impact on the material wealth of the ordinary people.

Several innovations happened in the chemical, electrical, petroleum, and steel industries. Some specific innovations included the introduction of an oil-fired steam turbine and internal combustion driven steel ships, the development of the aeroplane, the practical commercialization of the automobile, mass production of consumer goods, the perfection of canning, mechanical refrigeration and other food preservation techniques, and the invention of the telephone.