Our planet earth is a home to millions of living beings. From micro-organisms and bacteria, lichens to banyan trees, elephants, and blue whales, there is a vast multitude of living organisms found on the earth. Sadly, the human beings today have transformed the nature and wildlife into a resource.

As said by Gandhiji, ‘The world has enough for everyone’s need but not enough for everyone’s greed.’ Despite knowing and understanding this truth, we do not put it into practice. As a result of this, our natural resources are at a constant risk of depletion. So, here we’ll study about forest and wildlife in particular. Let’s find out more about Forest and Wildlife Resources.

Flora and Fauna in India

India is said to be one of the world’s richest countries in terms of the biological diversity. It has more than 8 percent of the total number of species in the world that is estimated to be 1.6 million.

Unfortunately, 10 percent of India’s recorded wild flora and 20 percent of its mammals are today on the threatened list. Moreover, many are even categorized as ‘critical’, that is on the verge of extinction like the cheetah, pink-headed duck etc. 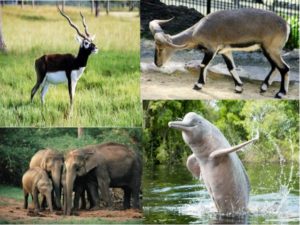 There are a number of factors which have led to the depletion of flora and fauna. These include:

Reasons for a Decline in India’s Biodiversity

Some of the reasons that have led to a decline in the biodiversity of India are:

Conservation of Forest and Wildlife in India

Conservation is necessary to preserve the ecological diversity and our life support systems such as air, water, and soil. In response to the conservationist’s demand, The Indian Wildlife (Protection) Act came into action in the year 1972. This act provided several provisions for protecting habitats.

The primary agenda of the programme was to protect the remaining population of certain endangered species by banning hunting, giving legal protection to their habitats, and restricting trade in wildlife. For this, the central and the state governments established different national parks and wildlife sanctuaries.

The central government has also come up with different projects for protecting specific animals, which were gravely threatened, including the tiger, the one-horned rhinoceros, and others. In the year 1973, Government of India, came up with the Project Tiger to save the endangered species of tiger in the country.

Under the Wildlife Act of 1980 and 1986, several hundred butterflies, moths, beetles, and one dragonfly have been added to the list of protected species. In the year 1991, plants were also added to the list.

Types and Distribution of Forest and Wildlife Resources

In our country, the majority of forest and wildlife resources are either owned or managed by the government. This is done by the Forest Department or other government departments. Forests are usually divided into following categories:

Q1. What was the Chipko Movement?

Ans. Chipko Movement was the movement that was launched by the people of the Himalayas as their fight against deforestation. In this movement, people stood hugging the trees, hence it gets the name, ‘Chipko’ Movement.