Ecology and Ecosystem: What’s the Difference?

The biotic (living) components that are closely related to as well as interact with the abiotic(non-living) components constitute an ecosystem. Ecosystems are mostly recognized on the basis of their geographical region. The biosphere is the region that is characterized by the presence of life.

The biosphere is the narrow realm of contact and interaction between the atmosphere, lithosphere as well as hydrosphere. It is a 15 km wide layer extending from the deepest ocean trench to the highest mountain peak. It is the supporter of all life forms. There are chiefly two life forms that exist in the biosphere- the plant kingdom and the animal kingdom.

These are the materials or substances occurring in nature which can be exploited for economic gains.The most important natural resources include:

Significance of Land as a Resource

The land is an asset of a finite magnitude, therefore, it is important to use the available land for various purposes with careful planning to minimize its exploitation.  Land resources are categorized into the following types on the basis of their use:

Gross cropped area is the area that is sown more than once in an agricultural year in addition to the net sown area.

Sliding down the slopes from mountains or hills are called a landslide. The things that come down with the sliding land mass include stones, mud, as well as debris. Landslides occurring in the steep mountainous regions are more destructive.

The important causes resulting in landslides include

Soil as a Natural Resource

Another important natural resource is soil. It is the thin layer of a grainy substance which covers the surface of the earth. The important constituents of soil include:

Soils are derived from parent rock material through a process of the breakup or wear and tear. Decomposed vegetal and animal remains, referred to as humus is an important constituent of soil and adds to the fertility of the soil. Besides hummus, silica, clay, and sand are the other factors affecting the formation of soil.

Soil Erosion is the removal of the uppermost layer of soil by water, wind as well as human activities. The human activities that lead to soil erosion include deforestation and mining. It can also be caused as a result of overgrazing by animals. Natural calamities such as droughts or floods can also result in soil erosion.

Soil conservation is the preventing of soil loss from erosion or reduced fertility caused as a result of over usage or acidification, salinization as well as soil contamination caused by chemicals. The various methods that can be employed for the conservation of soil include 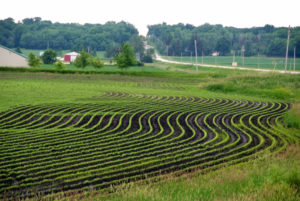 Water as a Natural Resource

About 97% of the earth’s water supply is in the ocean. Due to high salt content, it is unfit for human consumption as well as other activities.Out of the remaining 3 percent, 2.3 percent is locked in polar ice caps. Subsequently, balance 0.7 percent is available as freshwater of which 0.66 percent is groundwater.

Thus leaving a mere 0.03 percent available to us as freshwater in rivers, lakes, and streams. Therefore despite the earth’s surface being covered with water, a very small percentage is usable. Thus there is a need for conservation of water.

Methods for Conservation of Water

Natural vegetation refers to a plant community which has grown naturally without human aid as well as has been left undisturbed by humans for a long time. The following major categories of forests may be identified in our country:

Need for Conservation of Forests

Conservation preserves the ecological diversity as well as our life support systems such as water, air and soil. It also preserves the genetic diversity of plants and animals for better growth of species as well as their breeding. Forests not only play an effective role in controlling temperature, humidity, and precipitation but also in water percolation thereby maintaining the underground water table.

Q 1: Which of the following is not correct to show the utility of forests?

Ans: The correct answer is b. Forests do not help in water conservation.