Do you know haloalkanes and haloarenes persist in the environment? Haloarenes were used as herbicides during Vietnam War for defoliating the jungles and making it easier to fight in the war. These haloarenes cannot be decomposed and broken down by microorganisms like bacteria. As a result of which it is still intact in the soils of the jungles to this day.

Do you know haloalkanes containing halogens like chlorine, bromine, and iodine are a threat to the atmospheric ozone layer? One of the very common examples of the haloalkane compound that lead to ozone depletion is chlorofluorocarbon. We might have come across haloalkanes and haloarenes several times in our day to day life as well as industries for various applications. Let us know more about these organic compounds.

Learn the methods of preparation of Haloalkanes and Haloarenes here.

Haloalkanes are organic chemical compounds formed by replacement of one or more hydrogen atom from an alkane group by a halogen group (elements of group 17 such as chlorine, bromine, Fluorine, iodine, etc.).

Aryl Halides/Haloarenes/Halogenoarene are aromatic compounds in which one or more hydrogen atoms attached to an aromatic ring is replaced by a halogen group. Haloarenes mainly differ from haloalkanes in the method of preparation and in its properties. This class compound and its derivatives are very broad and used for several purposes. One of the most important members of haloarene class is aryl chlorides.

They can be classified on the basis of-

On the basis of the number of hydrogen, they can be divided into mono, di or poly (tri, tetra, and so on) compounds of haloalkanes and haloarenes. It is named depending on the number of halogen atom these compounds contain in their structures. For example, 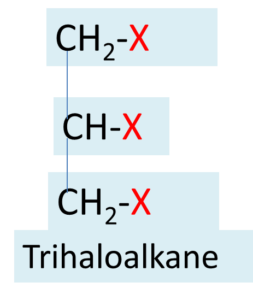 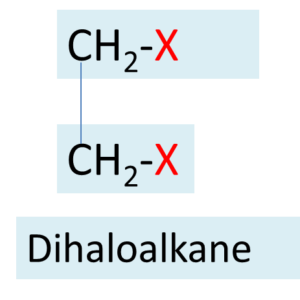 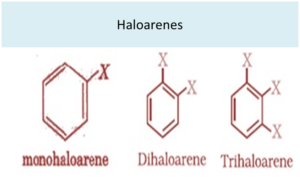 Monohalocompounds can again be classified into classes and subclasses on the basis of hybridization of the carbon atom to which the halogen atom is attached.

These compounds can be further divided into three types. They are:

In this class, the halogen atom is attached to an alkyl group. The general homologous formula followed by this class is CnH2n+1 X. They are further classified into mainly three types on the basis of the carbon atom to which the carbon bearing halogen (X) atom is bonded- primary, secondary, and tertiary. This classification is based on the nature of carbon atom to which the halogen is attached. 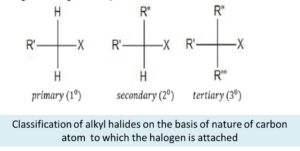 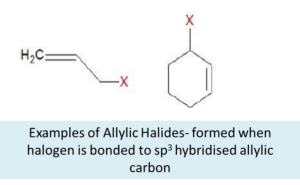 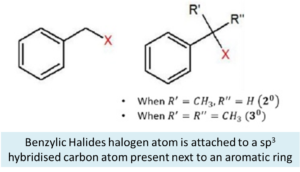 3) Compounds Having the sp2C-X Bond

This class of compounds includes vinyl halides and aryl halides.

These compounds are formed when halogen atom is attached to an sp2 hybridized carbon atom present next to a carbon-carbon double bond (C=C).

This class of compounds is formed when the halogen group is bonded to an sp2 -hybridized atom of carbon in an aromatic ring. 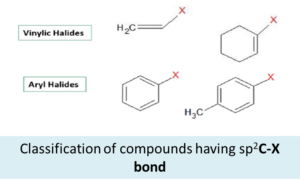 Applications of Haloalkanes and Haloarenes

Haloalkanes and haloarenes are used for many industrial and day to day purposes. They are used as flame retardants, propellants, solvents, pharmaceuticals, refrigerants, fire extinguishants, and many more.

There is a widespread use of these compounds for commercial purposes. However, halocarbons are linked with serious pollutants and toxins that adversely affect the environment.  For example, a popular compound CFC (chlorofluorocarbon) is one of the significant reasons for ozone depletion in the atmosphere. Another very controversial fumigant linked to many harmful environmental effects is methyl bromide. These compounds have been time and again proved to be the major problem to the environment because of its harmful effect.

However, there are compounds such as Methyl iodide that does not cause any ozone-depleting effects to the environment. Furthermore, USEPA (the United States Environmental Protection Agency) has termed the compound as a non-ozone layer deplete.

Q: Identify 1°, 2° and 3° haloalkanes from the structures given below. 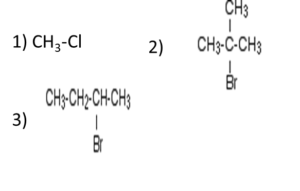