When we were kids, we used to fancy a map! Even if we never understood anything, it felt great to locate places on it. Isn’t it? But, now that we are grown up, things are different! Let us try to know all that we can about maps. This will help us in studying and understanding the world geography better.

Table of content
1 Suggested Videos
2 What is a Map?
2.1 Types of Maps
2.2 Components of Maps
3 Globe Versus A Map
4 Question For You

What is a Map?

A map is a representation or a drawing of the earth’s surface, or a part of it, on a flat surface, according to a scale.  It could be hand drawn or printed. It helps us identify the places and locations within an area helping us to navigate from one place to another. 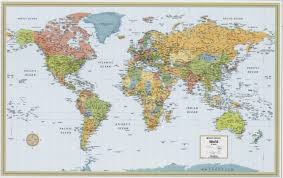 Maps are of several types.  They are mainly classified into:

Maps have three components: distance, direction, and symbol. We measure distance in terms of scale. A scale is a ratio between the actual distance on the ground and the distance shown on the map.

Directions are cardinal points like North, South, East and West. And symbols are certain letters, shades, colours, pictures and lines, which give us information about a limited place. Various other things like sketches and plans are used to draw an area of a large scale.

Globe Versus A Map

A globe differs from a map in many aspects. Let us look at some key points of difference between a globe and a map. A compilation of many maps is called an atlas.

Q. Discuss the types of maps.

Ans: Maps are of several types.  They are mainly classified into: