In our childhood, our first experience with a pencil would surely have been associated with drawing random lines. But, do you know lines are the most vital element of ancient geometry. Moreover, this geometric figure has led to the development of several modern day theories which we are studying at present. Let us try to relate to this concept and form an understanding of the significance of line in mathematics.

In a precise manner, a line doesn’t hold a beginning or end point. You can imagine it continuing infinitely in both directions. We can demonstrate it by little arrows trailing at both ends.

When two points are linked with a straight line, this is when we get a line segment. This below-mentioned line segment is AB.

A ray initiates from a point and lasts off to infinity. This can be represented by drawing an arrow symbol at one end of the ray. Sunrays can be a perfect example that initiates from the sun and travels indefinitely.

From the figure drawn below, the angle falling between 0° and 90° is termed as an acute angle. 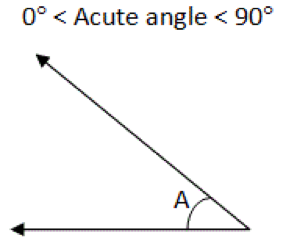 An angle that is 90° is called as a Right angle. In the figure, ∠C represents a right angle. 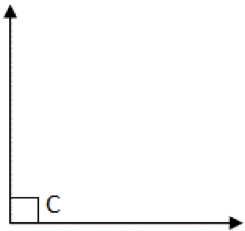 Based on the figure, ∠AOC + ∠COB = ∠AOB = 180° If the addition of two angles is 180°; in this case, the angles are termed as supplementary angles. Further, it should be noted that two right angles would always supplement each other. Also, the pair of adjacent angles which when added form a straight angle is termed as a linear pair. 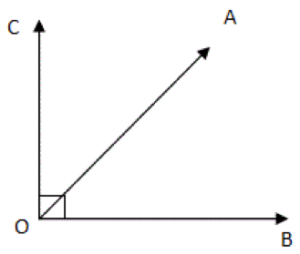 Hence, if the sum of two angles is 90°; in this case, the two angles are known as complementary angles.

Whenever two lines intersect, the formation of angles is opposite to each other specifically at the point of intersection (vertex). These are termed as vertically opposite angles. Whenever there is a right angle in the middle of two lines, then the lines are known to be perpendicular to each other. From the figure, the lines OA and OB are termed as perpendicular to each other. Referring to the figure, A and B are the two parallel lines, which are intersected by a line p. Here, the line p is known as a transversal, which meets two or more lines at distinct points.

Under this condition, one must remember that:

Question 1. Suppose lines m and n tend to be parallel, then define the angles ∠5 and ∠7. Question 2: What is meant by lines?

Answer: Line is a basic concept of elementary geometry. A line refers to a mark that connects two points. For example, line can be a horizontal mark that can be drawn on a piece of paper. Moreover, it is the shortest distance between any two points. Every point on a line will divide a line into parts, except the endpoint.

Question 3: What are the various kinds of lines?

Answer: There are four kinds of lines that exist. These four types are vertical line, horizontal line, parallel line, and perpendicular line.

Answer: A perpendicular line is one that is perpendicular to another line when the intersection of the two lines takes place at a right angle.

Question 4: Who is credited with defining lines?

Answer: Euclid defined a general line, whether straight or curved, as “breadthless length”. Furthermore, he defined straight line as a line “which lies evenly with the points on itself”.

Answer 5: A vertical line is a line that goes straight up and down. Furthermore, it is parallel to the coordinate plane’s y-axis.