Colonialism is taking over a less powerful country and using its resources and wealth for the benefits of the powerful country. The cities like Delhi and Calcutta were capital of many other superpowers ruling India. To know more about Colonialism and different colonies explore the article further!

Colonialism started in the countries like Spain, Portugal, Britain, Russia, France during the 15th century to 1914. It occurs when a country or a nation takes control of other lands, regions, or territories outside its borders by turning them into colonies. Therefore, there was an increase in exploitation. There are different types of colonialism and they are as follows

Therefore, these are the types of colonies in colonialism. Colonialisation started in 1498 in India. India was under the rule of British for 200 years. Hence India was exploited, especially exploited for spices and other agricultural products.

Calcutta, Bombay and Madras were the presidency cities during the British rule in India. Therefore, these three states became the centre of British rule. All the trading routes were declining when the centres move to the presidency states of India. Hence the local trader and the markets collapsed due to the regional power. Thus giving rise to de-urbanisation.

Delhi the capital of India is the capital of many mighty empires and was commonly known as Delhi Sultanate.  “The city of God Indra” during the Mahabharata era is current Delhi. Great emperor like King Ashoka, King Kumar Gupta also has developed significant structures in this city. Therefore, Delhi has an abundance of significant infrastructure.

Delhi had about 15 settlements on its land and numerous transformations. the settlements on this land were as follows Indraprastha, Surajkund, Lalkot, Siri, Tughulqabad, Jahapanana, Ferozabad, Dinpanah, Shahjahanabad, New Delhi. Since Delhi is a home of many settlements hence it is the capital of our country. 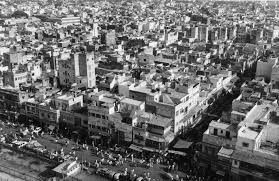 Question: In which year Delhi became the capital of India?

Solution: 1911. After the annulment of Partition of Bengal in 1911, the capital of India was shifted from Calcutta to Delhi. A Grand darbar was organised in Delhi. George V attended the Delhi Durbar in 1911. Hence 1911 is the answer.

Question: Which one of the following was the summer capital of the Government of India from the year 1865 to 1939?

Solution: Shimla. Shimla is the capital city of Himachal Pradesh which is located in Northern India. Shimla was built by British after they won the Gurkha War. The city, blessed with scenic beauty, acted as summer capital to the British government in India during the years 1865 to 1939. Hence Shimla is the answer.

Question: The Home Rule Movement was started by

Solution: Mrs Annie Besant. In September 1915, Annie Besant launched the Home Rule League, modelling demands for India on Irish models. She clearly gave a signal of fighting for a change. For the first time, India saw a political party that was to work all year round, unlike the Congress which croaked once a year. The result was that she was able to mobilize the demonstrations and organize demonstrations, public meetings and agitations. Hence Mrs Annie Besant is the answer.

Colonialism and the City - The Story of an Imperial Capital

Colonialism and the City - The Story of an Imperial Capital