When the First World War broke out in 1919 in Europe it had far-reaching consequences in the entire world. It was actually could have said to ignite the fight for India’s independence! It ignited the spirit of nationalism in India due to the emergence of Satyagraha and Non-Cooperation movement. Let us take a look.

Table of content
1 Suggested Videos
2 The Idea of Satyagraha
2.1 The Rowlatt Act
2.2 Khilafat movement
2.3 The Feeling of Nationalism
3 Solved Question for You

The Idea of Satyagraha

Nationalism was evolving in new areas in 1919 and, new social groups and new modes of struggle were developing. Mohandas Karamchand Gandhi (Mahatma Gandhi) came to India and along with him the idea of satyagraha focused on the power of truth and the urgency of searching the truth.

The idea imposed the power of truth and encouraged people to find the truth. He believed that physical force was not the required step to fight the colonialists. In 1916, He travelled to Champaran, Bihar to encourage the peasants to struggle against the oppressive plantation system.

In 1917, Crops field in Kheda district of Gujrat, but the government denied to remit land revenue and pressurized on its full collection. In 1918, Gandhi came in between the dispute which involved the workers and mill owners of Ahmedabad. He advised to workers to go on a strike and to demand a 35% increase in wages. This brought him close to the people with the workers also. 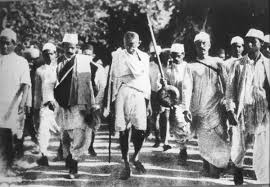 After the enactment of The Rowlatt Act,1919 Gandhiji lost his patience and wanted to enforce non-violent civil disobedience against such unjust law.

6th April 1919 was confirmed as Satyagraha Day when people all over the country observed fast. On 10th April, the police in Amritsar fired upon a peaceful procession, provoking widespread attacks on banks and this incident is famously known as Jallianwalla Bagh Massacre.

After the widespread of Satyagraha movement, it was still limited to cities and towns. Mahatma Gandhi then launched the Khilafat movement. The only way possible for this was coming together of Hindus and Muslims.

A Khalifa Committee was formed under the leadership of Maulana Azad, Ajmal Khan, and Hasrat Mohani. The idea was to bring about unity and develop feelings of nationalism among the masses.

The Feeling of Nationalism

Nationalist movement spreads when people from different religions and communities begin to develop a sense of collective belongingness. Through this, an identity of a nation is characterized. This image of Bharat Mata was first created by Bankim Chandra Chattopadhyay in 1870 when he wrote ‘Vande Mataram ‘ for our motherland.

During the Swadeshi Movement, a tri-color (red, green and yellow) flag was designed in Bengal. It had eight lotuses representing eight provinces and a crescent moon representing Hindus and Muslims.

Ans. The three economic effects of Non-Cooperation were :