You must have heard your parents talk about their town fondly. It is normal for our elders to reminisce about some native town in their distant past where everybody knew everybody else. While today, all we try to do is make sure nobody knows us. While this generation fights the over-familiarity of the neighbours, it is equally interesting to know about the history of these towns. How they came up? How were the managed and who inhabited them? In this chapter, we will learn precisely this. Let us begin.

Urbanization saw expansive growth during the 17th century. This period is also referred to as the medieval period. There was an influx of people from other adjoining countries. Turks, Arabs and Afghans came and settled in various parts of the country. This lead to rapid growth of towns and cities. 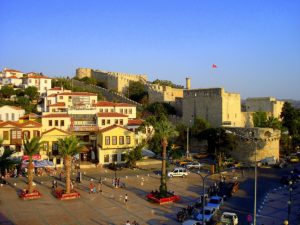 Sources of Knowledge for History of the Period

The first source to find out about any period in history are the books. Accounts are written by travellers of the period act as a guide of that particular time. Travellers like Abdul Razzaq, Nicolo Conti, Thomas Roe, Flitch, Monserrate etc. have written extensively about 17th century India. We can find many accounts of towns and their evolution in their journals.

Although there is no clear-cut distinction between two towns, yet, some of them differ from another in terms of size, geographical location or even occupation of the residents. Based on such distinctions, the researchers categorised towns under several heads. They are as under:

These were the politically important and comparatively bigger towns of the country. They included Delhi, Agra, Fatehpur Sikri and Lahore. Delhi at the time was known as Shahjahanabad, after the name of emperor Shahjahan. The town of Fatehpur Sikri was founded by Akbar and was declared as capital during his reign. During the medieval times, these towns held the seat of the ruler, hence the name.

Next were the towns which were famous for their trade. Since during those days trading happened either by land or by sea, these were mostly by the seaside. Hence, they were called as port and trading towns. Surat, Nagapattinam, Broach are among some of the prominent ports of the period.

These were basically the seat of administration. In other words, capital cities. The rulers operated from these towns to administer the adjoining ones. Thanjavur and Uraiyur are few of its examples.

Religion had always been an important part of the civilisation. As a result of which there were certain towns which were designated holy places. They were so named due to having holy places or pilgrimage centres in them. A lot of money came through pilgrims by way of donations. The money received was further channelized into trade and banking.

These towns became the centres for economic development and urbanisation. Varanasi, Ajmer, Tirupati, Somnath etc. are examples of this kind of town.

The Emergence of Small Towns

So far we have talked about the key towns that emerged during the 17th century. These were a cluster of important towns that catered to some of the important aspects of India. But long before we had them, towns had started emerging in India. The oldest recorded reference of towns is from the 8th century. As the villages started growing bigger, they took shapes of small towns. Markets called as ‘mandapika’ came up.

Villagers would sell their products in these markets. Similarly, there were street markets which were called as “hatta”. These streets were dedicated to markets alone. This became the culminating point for buyers and sellers. The villagers will bring their products, cattle or produce to sell out here and buyers will come to purchase them.

Everything from a horse, to beetle nut, was sold in these markets. Traditionally a “Samanta” was appointed by the authorities. They fortified the palaces and also collected taxes from traders and artisans who visited the market.

The emergence of small towns was the result of the village population spreading further. As more and more land was being occupied for residential purposes, need for artisans and craftsmen also grew. That lead to a rise in the craftsmen and artisans in India.

Q. Why according to you, towns were built around temple?

Ans: Religion was an important aspect of India since ancient times. Therefore, holy places always had significance for the people. The factors that gave rise to towns around temples are as follows: