When one person robs another person of fame than he/she is charged with defamation. Here the word does not automatically means famous. Also, fame is not a tangible object that someone can rob off physically. So, the best way to define defamation is when someone deprives another person a sense of their reputation. This reputation is in the eyes of other people who are in their right mind in and around the person. The reason for this is reputation is something that is very difficult to build, like a house of cards. Also, it can get over without even giving due notice.

How does A defame B? 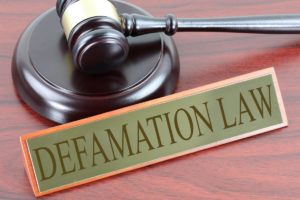 There are three conditions that can be categorized under defamation. These are:

There are two ways through which we can transmit the defamatory statement. One is through slander and another one is through libel. Libel is done through text or graphic and it is permanent in nature. Thus, it can be said that it will stay as long as the graffiti or statue or picture stays on.

Defamation can also be done through slander. Here, slander is referred to as transient or non-permanent in nature. Thus, in this case, the effect of defamation is considered to subsist for the time period of comment or action.

Slander can also happen in a way that will closely represent libel. For example, when you dictate some defamatory comments to your clerk who in turn types it on a letterhead the communication that is going to happen for the third person through the speech. Thus, in this case, the mode of transmission is the one that is considered transient.

For an action to be considered as a libel the proof in contention should be proved as defamatory, false, made public, or in writing. The comment that defamatory made should be directly or indirectly referred to the plaintiff. Furthermore, this comment should also draw a reasonable connection between the comment and the person.

Though it is not necessary that person should be named specifically neither is the intention of that defendant. However, defamation cannot be made against a category or a deceased person such as doctors. So, in these types of cases if the defamation happens to injure the living person’s reputation than that person will be sued for defamation.

The defendant in the case cannot rely merely on the fact that they were just passing the hearsay or the rumors. As far as privilege is concerned, the defense for is given to the person who has some special status under the given circumstances. These privileges can be further divided into qualified privilege and absolute privilege.

Q. Which of the given options below is/are incorrect?

A. The tort in the defamation includes the publication of a defamatory statement.

B. The tort of defamation with lawful justification also includes publication of defamatory matter.

C. The tort of defamation, in the eyes of right-minded people of the society, involves lowering the reputation of a person.