Bonus is the extra given to the workers to motivate them in a monetary way so they work efficiently. The payment of Bonus Act focuses on bonuses. This system of rewarding bonuses in our country dates back to the First World War when some textile mills imparted some percentage of their wages as a war bonus to their operators which happened in 1917.

In 1950, the Complete Stand was taken by the Labour Appellate which unfolded specifications for resolution of bonus for laborers. There was a pleading which was executed to propose that direction in 1959. 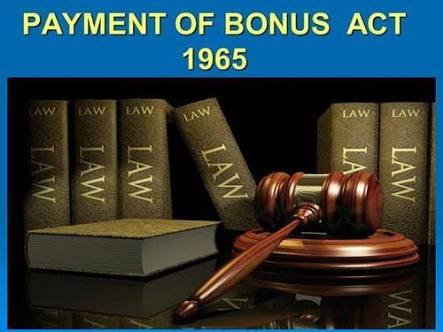 The Government of India affirmed the testimonials of the Commission directed to some alterations. These recommendations by the committee regarding the Payment of Bonus Act Ordinance, 1965 was proclaimed on 29th May 1965 and to restore the said Ordinance the Payment of Bonus Bill was presented in the Parliament.

Why the Payment of Bonus Act, 1965  was the act introduced?

The Payment of Bonus Act, 1965 is to proclaim the progression to deliver a rightful responsibility on the employers to distribute their profits with their employees on

the foundation of their performance in the organization or on the source of their productivity.

Applicability of the Payment of Bonus Act, 1965

The Act extended to the entire country and is implemented to all industries and establishments in which there were  20 or more persons are employed on any day throughout an accounting year.

Also, the act is applicable to the factories where there are less than 20 workers, but not less than 10 workers were there in number.

All the employees of the organization are under the preview of the act unskilled, skilled, manual, supervisory, administrative, managerial, technical or clerical work for hire or reward and whether the terms of employment are express or implied the act extended on each and every worker.

Eligibility criteria of the Payment of Bonus Act, 1965

The Bonus Act is relevant for workers who draw wages/salary which is up-to 10,000/- per month. Also, only those workers are authorized for availing the bonus, who has served for at least 30 working days or more in an accounting year.

Rate of Bonuses under the Payment of Bonus Act, 1965

The rate of bonus under the Bonus act accounted for 8.33% of the salary or wages of the employees in a year or Rs. 100, whichever is higher.

In case the allowed bonus exceeds the expense of provision then the employer shall pay a maximum bonus. This must not surpass 20% of the salary or wages accounted for by employees.

Question: What is the eligibility criteria for workers to fall under the Bonus Act?

Answer: The correct option is (B). As the Act is relevant for workers who draw wages/salary which is up-to 10,000/- per month.