Table of content
1 Suggested Videos
2 What is Magnetism?
2.1 Magnetic field
2.2 Magnetic force
3 Force on a moving charge
4 Right-Hand Rule
5 Solved Example For You

A bar magnet attracts iron objects to its ends, called poles. One end is the north pole, and the other is the south pole. Magnetism is the phenomena arising from the force caused by magnets that produce fields which attract or repel other metallic objects. It is caused because of electrically charged particles. The force acting on the electrically charged particles in a magnetic field depends on the magnitude of the charge, the velocity of the particle, and its strength. Magnetism states that: 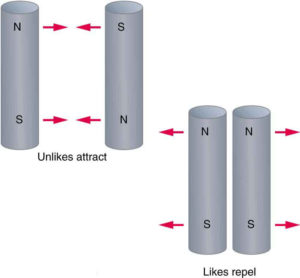 If two bar magnets are brought close together, the like poles will repel each other, and the unlike poles attract each other.

It is expressed in the unit Tesla.

Examples of magnetic force is a compass, a motor, the magnets that hold stuff on the refrigerator, train tracks, and new roller coasters. All moving charges give rise to a magnetic field and the charges that move through its regions, experience a force. It may be positive or negative depending on whether the force is attractive or repulsive.The magnetic force is based on the charge, velocity and magnetic field of the object.

Force on a moving charge

This is written as,

The direction of the force (F) can be found from the Right-hand rule.

It applies to the devices that use motion in a magnetic field to generate currents. 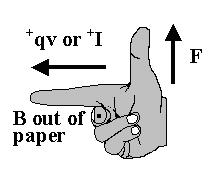 Q.Determine the magnetic force of 50 C charged particles moving with the velocity of 3m/s in a magnetic field of 1T? The direction of its field is same as the path of the second particle.