What is nuclear energy? 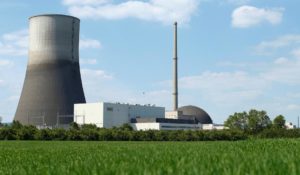 What does this mean?  If nuclear energy is generated, a small amount of mass transforms into pure energy such as thermal energy or radiant energy.

and the energy released by the combustion of the following :

Energy releases in this way.

Power plants use nuclear reactors for generation of electricity.  A nuclear reactor produces and controls the release of energy from splitting the atoms of uranium. Heat from the nuclear fission then passes to a fluid which runs through turbines. Most reactors are working on the principle of fission. Except for the reactor itself, a nuclear power station works like coal or gas power stations. A typical reactor may contain about 165 tonnes of fuels. This fuel contains 157 fuel assemblies constituting over 4,50,000 fuels rods. When control rods are lifted the fission starts and makes heat. Generally, fuel assembly contains energy for nearly 4 years of operation at full power. We can find uranium in rocks all over the world but power plants for same are very rare.Unlike solar energy and wind energy, uranium is a non-renewable source of energy. The problem with uranium is its confinement. So nuclear energy is not a renewable source of energy. All the nuclear energy we are ever going to get is locked up in the strong and weak nuclear forces in the atoms of the earth. Fission by itself is rare enough that we could never get useful energy out of it, but the neutrons can be absorbed by other atoms, making those atoms unstable and causing further fission.

Mutations and DNA alterations may occur in the living cells if the handling of radioactive material doesn’t occur with adequate precautions. The radiations of radioactive materials are invisible due to which our sense organs cannot feel the radiations. Precautions such as lead jackets are necessary for the workers in nuclear laboratories. When the workers store these waste products which are dangerous for long periods, they must be careful. The spent fuel is highly radioactive and so one has to carefully store it for many years or decades. This also adds to the cost.

Q.Which device can be fitted in the exhaust system of vehicles to control the pollution of air caused by burning petroleum fuels like petrol and diesel?

a. Electrostatic precipitator      b. Catalytic converter

Catalytic converters work on a redox reaction where they convert the toxic gases emitting out the vehicle into a less polluted form.