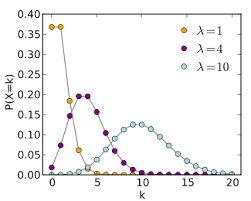 The French mathematician Siméon-Denis Poisson developed this function in 1830. This is used to describe the number of times a gambler may win a rarely won game of chance out of a large number of tries.

Besides the disjoint time intervals, the Poisson random variable also applies to disjoint regions of space.

Some Applications of Poisson distribution are as following:

The probability distribution of a Poisson random variable let us assume X. It is representing the number of successes occurring in a given time interval is given by the formula:

\(\mu\)= mean number of successes in the given time interval or region of space.

Mean and Variance of Poisson distribution:

Remember that, in a Poisson distribution, only one parameter, \(\mu\) is needed to determine the probability of any given event.

Some Solved Examples for You

Example-1: Some vehicles pass through a junction on a busy road at an average rate of 300 per hour.

Solution: First we will compute,

The average number of cars per minute is: