In mathematics, a series has a constant difference between terms. We can find out the sum of the terms in arithmetic series by multiplying the number of times the average of the last and first terms. Thus we can see that series and finding the sum of the terms of series is a very important task in mathematics. In this topic, we will discuss some popular series and series formula with examples. Let us learn the concept!

What is the Series?

What exactly is a series? Actually, a series in math is simply the sum of the various numbers or elements of the sequence. For example, to make a series from the sequence of the first five positive integers 1, 2, 3, 4, 5 we will simply add them up. Therefore 1 + 2 + 3 + 4 + 5 is a series.

So, series of a sequence is the sum of the sequence to some given number of terms, or sometimes till infinity. It is often written as S_n. 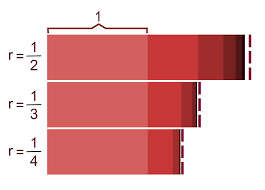 An arithmetic progression is a sequence, in which each term is a certain number larger than the previous term.  The terms in the sequence are known as to increase by some common difference, d.

1] The sum to n terms of an arithmetic progression

Where l is last term.

2] The sum of a geometric progression

The sum of the n terms of a geometric progression is given as:

3] The sum of a geometric progression with infinite terms

The sum S of infinite geometric series will be

Q: Find the sum of the following series:

Solution: It is a geometric progression with infinite terms.