A hyperbola is the set of all the points in a plane. The difference between these distances from two fixed points in the plane will be constant. Here difference means the distance to the farther point minus the distance to the closest point. The two fixed points will be the foci and the mid-point of the line segment joining the foci will be the center of the hyperbola. In geometrical mathematics, Hyperbola is an interesting topic. Here we will discuss the Hyperbola formula with examples. Let us learn the concept!

In simple words, hyperbola looks similar to the mirrored parabolas. The two halves are referred to as the branches. When the plane intersects on the halves of a right circular cone angle of which will be parallel to the axis of the cone, then hyperbola is formed. 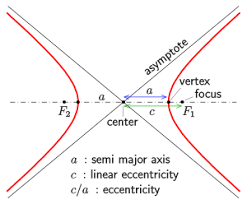 Some Basic Formula for Hyperbola

Share with friends
Previous
Coronavirus (COVID - 19) - Symptoms and How to Prevent it?
Next
Series Formula