The Taylor series formula is the representation of any function as an infinite sum of terms. These terms are calculated from the values of the function’s derivatives at a single point. This concept was formulated by the Scottish mathematician James Gregory. But, it was formally introduced by the English mathematician Brook Taylor in 1715. For the expansion of mathematical series, it is used extensively. In this topic, we will see the concept of Taylor series and Taylor Series Formula with examples.

What is Taylor Series?

A function can be approximated by using a finite number of terms in its Taylor series. Taylor’s theorem is providing quantitative estimates on the error. The polynomial formed by taking some initial terms of the Taylor series is popular as Taylor polynomial.

We have two assumptions. First, assume that the function f(x) does in fact have a power series representation about x=a,

Next, we will assume that the function, f(x), has derivatives of every order and that we can find easily.

To find out a condition that must be true in order for a Taylor series to exist for a function, we first define the nth degree Taylor polynomial of

This polynomial is of degree at most n. If we have to write some without the summation notation this would clearly be an nth degree polynomial. 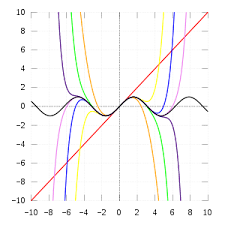 We now have the following Theorem.

Q.1: Find the Taylor Series for

Solution: To find the Taylor Series for a function we need to determine a general formula for

Thus the Taylor series for