In geometry, we are having objects with various shapes and sizes. One such shape is a trapezoid. It is a little bit uncommon in comparison to other kinds of shapes. It comes under the categories of quadrilaterals, as it has four sides. A trapezoid is a two-dimensional geometric figure which has four sides and at least one set of opposite sides parallel. In this article, we will discuss the trapezoid area formula with examples. Let us learn this topic in easy terms!

Table of content
1 Trapezoid Area Formula
1.1 Definition and Structure of Trapezoid
1.2 The formula for Area of a trapezoid:
2 Solved Examples

Definition and Structure of Trapezoid 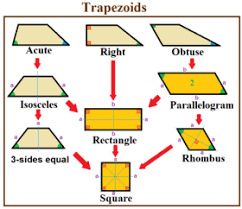 The formula for Area of a trapezoid:

The area can be computed with the help of the following simple steps to arrive at the trapezoid area formula,

Mathematically formula is given as,

Q.1: Find out the area of a trapezoid whose bases are 25 cm and 31 cm and the perpendicular height is 7 cm?

Solution: As given in the problem,

Now applying the formula for the area of a trapezoid,

Therefore the area of the trapezoid will be 196 square cm.

Now, formula for area of trapezoid is,