A vector is any object having both a magnitude and a direction. Geometrically, we can draw a vector as a directed line segment, whose length is the magnitude of the vector and with an arrow indicating the direction. The direction of the vector is indicated from its tail to its head. In this topic, we will discuss the concept of a vector and some vector formula with examples. Let us learn the concept!

A vector is used to represent the object containing magnitude as well as direction. Two vectors shall be the same if they have the same magnitude and direction. This means that if we take a vector and translate it to some new position. Then the vector we obtain like this at the end of this process is the same vector we had in the beginning.

A vector is typically represented by an arrow mark above. Also whose direction is the same as that of the quantity and whose length is proportional to the magnitude. Vector quantities are often represented by scaled vector diagrams with values. The vector diagram will depict a displacement vector. 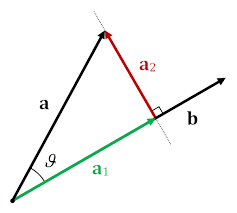 If two forces Vector A and Vector B act in the same direction. Then its resultant vector R will be the sum of two vectors.

The formula for Triangular law of addition: R =A + B

If we represent the two forces Vector A and Vector B by the sides which are adjacent in the parallelogram, then their results will be represented by the diagonal of a parallelogram drawn from the same point.

The formula for Parallelogram as the law of Addition is: R = A + B

If two forces Vector A and Vector B are working in the direction opposite to each other. Then, we represent their resultant R by the difference between the two vectors.

Therefore, the formula for Vector Subtraction: R = A –  B

Q.1: Provide the vector for each of the following:

(a): As we know that to construct this vector we subtract coordinates of the starting point from those of the ending point.

Remember that the only difference between the first two is the signs, which are all opposite.  This difference is important as it is saying about the two vectors which point in opposite directions.

(c): Nothing is needed to do here much to this one other than acknowledging that the position vector of a point is nothing more than a vector with the point’s coordinates as its components.  Thus it is ( -90, 4 )