If your height is 5 ft and 10 inches, don’t you call yourself approximately 6 ft tall whenever asked? Similarly, if you scored 97.75% in your examinations, don’t you boast about it by chanting that you scored approximately 98%? Such is the intuitive nature of the topic of approximations that it doesn’t even need an explanation!

However, the general notion of approximating values differs from its mathematical treatment. While 9.99 is still approximately equal to 10; here we will talk about approximating the values of quantities whose exact value is not known to us or cannot be calculated through any known means.

For example, try working out the value of the square root of 10 without using a calculator. You’ll fumble around for some time and then get stuck up on the answer that it is approximately equal to 3. You won’t be able to get more accurate than that. This is what the method of approximating certain quantities deals within mathematics.

As the name suggests, this method relies on the derivatives of the functions whose values are to be determined at some points.

What we can achieve is a value of dx = Δx, which is very small as compared to the values of x on which we are working. This is what actually forms the ‘approximation’ part of our approach. Under these conditions, we can approximate the change in the value of the function by the value of the differential at that point i.e. dy.

The general form of writing the result obtained above is:
$${f(x+\Delta{x}) = f(x) + f'(x)\Delta{x}} $$
which enables one to get the value of the function at a point near x. In connection with this formula, look at the figure below: 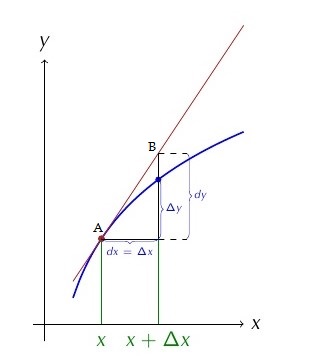 You should spot out that we have actually approximated the curve of the function by a straight line marked as AB. Using the formula for the slope of the straight line i.e. \( { m = tan\theta = tan(\angle{ABC}) = \frac{dy}{dx}} \) ; we have arrived at the relation \( { \Delta y = dy} \), which is approximately true, considering the small values of Δx that we are going to choose.

Thus, this form of approximations is also known as Linear Approximations! Confused on the implementation of this technique in mathematical problems? Just look at the solved example Question 1!

One can extend the notion of approximations of functions to approximating the errors in calculating certain functions as well, provided their exact dependence on the independent parameters is known. For example, let us have a function:

This formula follows directly as a consequence of our method of approximations explained above, and the logical assumption that the total error in the calculation of y is the sum of the different errors obtained in y due to the errors in the measurement of independent variables a, b, c….

Question 1: Approximate the value of √51 up to three decimal places.

Answer : Just by pure guesswork, you can work out the value of √51 to be approximately equal to 7; but as you can see: such approximations are not accurate enough for this problem. So let us resort to the method of differentials. Define a function

The result obtained thus is very close to the actual value, which is 7.141. You must note that we will get a more precise value if we calculate the value of √50 through the same method. Why is that? Actually, in that case the value of Δx = 51 – 50 = 1, would be less that the Δx here. Hence, the resulting Δf would be closer to the actual change in the value of the function.

Here A is just a function of a and b. So let us calculate the error in the area using the above-mentioned technique:

Question 3: Why do we use the approximation in Mathematics?

Question 4: How can we do successive approximation?

Answer: The technique for conducting the successive approximations is given below:

Answer: No, they both use a similar tangent line at the same time. Its 2 different ways of observing the same approximation.

Question 6: What is the linearization formula?