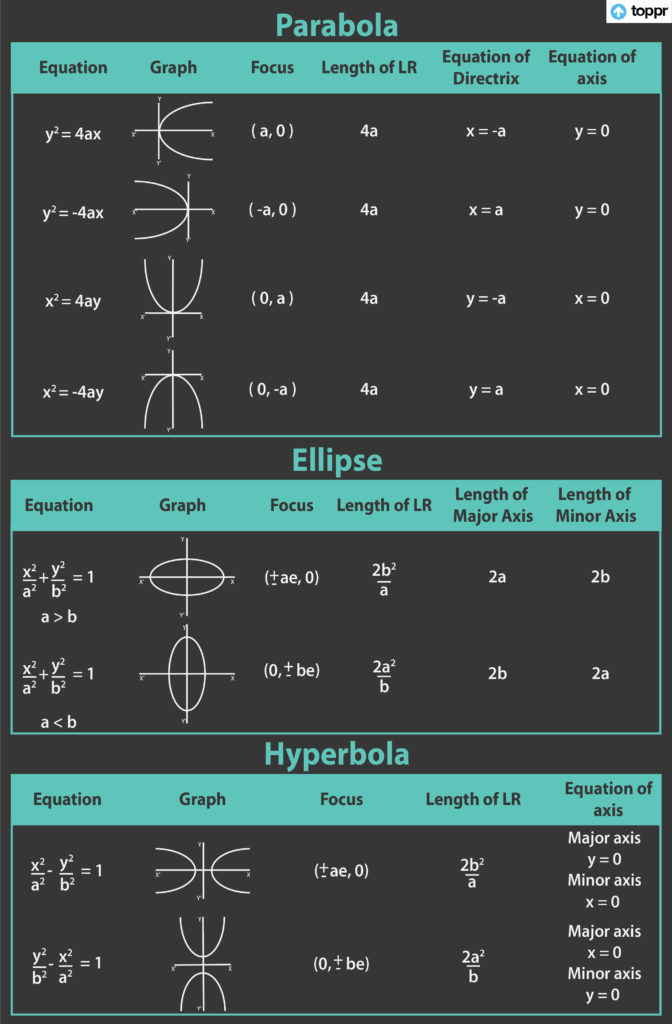 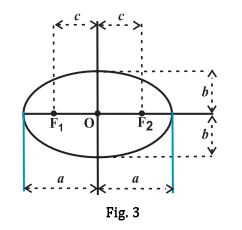 Take a look at the following diagram: 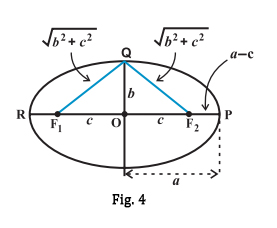 As shown, take a point P at one end of the major axis. Hence, the sum of the distances between the point P and the foci is,

Next, take a point Q at one end of the minor axis. Now, the sum of the distances between the point Q and the foci is,

We know that both points P and Q are on the ellipse. Hence, by definition we have

Of these, let’s derive the equation for the ellipse shown in Fig.5 (a) with the foci on the x-axis. Let F1 and F2 be the foci and O be the mid-point of the line F1F2. Also, let O be the origin and the line from O through F2 be the positive x-axis and that through F1 as the negative x-axis.

Derivation of Equations of Ellipse

Therefore, any point that satisfies equation (1), i.e. x2/a2 + y2/b2 = 1, lies on the ellipse. Also, the equation of an ellipse with the centre of the origin and major axis along the x-axis is:

Note: Solving the equation (1), we get

Hence the Standard Equations of Ellipses are:

Latus rectum of an ellipse is a line segment perpendicular to the major axis through any of the foci and whose endpoints lie on the ellipse as shown below. 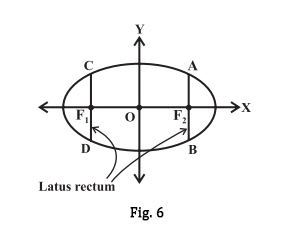 Now, in ‘eccentricity’ we learned that e = c/a or c = ae. Substituting the values, we get

Since the ellipse is symmetric to the y-axis,

Q 1: Find the coordinates of the foci, vertices, lengths of major and minor axes and the eccentricity of the ellipse 9x2 + 4y2 = 36.

Q 2: What are the types of an ellipse?

Q 3: What is the equation of ellipse?

Q 4: Tell about the two foci of an ellipse.

A:  The two prominent points on every ellipse are the foci. Further, there is a positive constant 2a which is greater than the distance between the foci. From any point, the sum of the distances to the two foci is equal to 2a.

Q 5: What is an ellipse shape?

A: An ellipse is a shape that resembles an oval or a flattened circle. In geometry, an ellipse is a plane curve resulting from the intersection of a cone by a plane in a way that creates a closed curve. Moreover, a circle is a special case of an ellipse.