Congruent objects are exact replicas of each other. The relation of two objects being congruent is called congruence. In this article, we will study about Congruent Triangles and how to understand and determine congruence between two triangles. Also, we will look at plane figures only in this article.

Look at the figures given below. Are they congruent?

Try tracing the copy of one and placing it on the other. In this case, they are congruent and are written as F1 ≅ F2 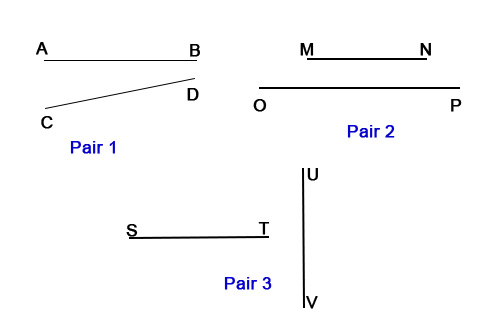 Try the trace method again. What are your observations?

Now, take a look at the four angles in the figure below:

Trace a copy of ∠PQR and try to place it on ∠ABC. To do this, place Q on B and the line QP along the line BA. Where does the line QR fall? If it falls on the line BC, then the angles are an exact match. Hence,

Next, trace a copy of ∠LMN and try to place it on ∠ABC. To do this, place M on B and the line ML along the line BA. Where does the line MN fall? It doesn’t fall on the line BC. Hence ∠LMN and ∠ABC are not congruent.

Finally, trace a copy of ∠XYZ and try to place it on ∠ABC. Although the line YZ seems longer than the line BC, remember that the rays in an angle only signify the angle and not the length. On placing the ∠XYZ on ∠ABC, you find that they are congruent. ∠XYZ ≅ ∠ABC. So, we observe that ∠ABC ≅ ∠PQR ≅ ∠XYZ

Important observation: Two angles are congruent when they have the same measure. Instead of denoting congruency by ≅ you can also denote it by = since they are equal in measure.

Let’s extend the idea of congruent planes, lines, and angles to a triangle. Look at the figure below:

Do they look similar? Trace a copy of the first triangle and try to place it on the second one. It covers the triangle completely. Hence, we say that both the triangles are congruent: ΔABC ≅ ΔPQR

On placing the trace-copy of ΔABC on ΔPQR, we find that

It is important to understand that when you say the two triangles are congruent, it is important to state the corresponding verticals, sides, and angles. Try placing the traced copy of ΔABC on ΔPQR so that the vertical B falls on P. Are they congruent now? No.

Remember, in the congruence of triangles the correspondence of verticals, sides, and angles are important. Correspondence is denoted by the ↔ symbol.

Criteria for Congruence of Triangles

Every time you want to find if two triangles are congruent, it might not be possible to follow the trace method. Here are some criteria that can help you fund Congruent Triangles easily. Before we start, take a good look at the figure below: 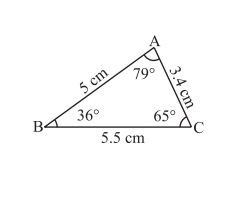 Let’s try to draw a congruent triangle to ΔABC. You can do so if you have the following information:

1. The length of all three sides is known

Draw a triangle ABC with the length of sides as follows: Observe, that you have drawn a congruent triangle to the triangle in Fig.5.

2. The length of two sides and the angle between them is known

Draw a triangle ABC with the following information:

You first draw a line BC having length 5.5cm. Next, draw a line at 65o from point C. With C as the centre draw an arc of radius 3.4cm cutting the line that you have drawn at 65o. This is point A. Now, join points A and B.

Observe, that you have drawn a congruent triangle to the triangle in Fig.5.

3. The measure of two angles and length of the side included by them is known

Draw a triangle ABC with the following information:

You first draw a line BC having length 5.5cm. Next, draw a line at 65o from point C and another line at 36o from point B. The point where these two lines intersect is ‘point A’. Hence, we can list three criteria to find congruent triangles:

Answer : (a) SSS criterion: as per this criterion, all three corresponding sides need to be shown equal. Hence,

(b) SAS criterion: Since ∠T = ∠N, as per the SAS criterion, the two sides which include the angle need to be shown equal. Hence,

(c) ASA criterion: Since AT = PN, as per the ASA criterion, two angles and the included side need to be shown equal. Hence,

Question 2: What does congruence mean?

Answer: Congruent objects are basically exact replicas of each other. Thus, the relation of two items being congruent refers to as congruence.

Question 4: What is the AAS congruence rule?

Question 5: What is a congruence statement?

Answer: A congruence statement refers to a statement which we use in geometry that basically states that two objects are congruent, or else are having the exact same shape and size.