Today let us look at the concept of arcs in a circle. You can expect quite a number of questions from this section, in your examination. Therefore, it is important that you understand the basic details of an arc. We will look at the concept in more details and also study a few examples of the same.

What is An Arc?

An arc is a continuous piece of a circle. This is the simplest way of expressing the definition. For example, let us consider the below diagram. Let P and Q be any two points on the circumference of a circle that has the center at O. It can be clearly seen that the entire circle is now divided into two parts namely arc QBP and arc PAQ. The arcs are denoted by ∠QBP and ∠PAQ respectively. 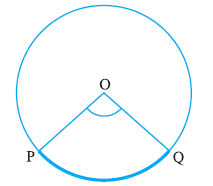 Arcs of a circle

You can also denote them by writing as ∠QP and ∠PQ respectively. Let us look at what are major and minor arcs now.

We hope you have got a better idea of the major and minor arcs now. Let us now look at some other basic concepts of it in same.

Degree Measure of an Arc

Let us consider ∠PQ to be an arc of the circle with its center at O. If ∠POQ is equal to an angle of θ°, we can definitely say that the degree measure of ∠PQ is θ°. We can also write it as m ( PQ ) = θ°.

Arcs of a circle

Two arcs can be called congruent if they have the same degree measure. If AB and CD are two arcs of the same circle, then they form ∠AOB and ∠COD at the center. If the measure of these two angles is the same, then ∠AB and ∠CD are said to be congruent arcs.

A diameter of a circle divides it into two equal arcs. Each of the arcs is known as a semi-circle. So, there are two semi-circles in a full circle. The degree measure of each of the semi-circles is 180 degrees.

If the radii of two circles are exactly the same value, then the circles are called to be congruent.

Two or more circles that have different radii but the same center are called as concentric circles. 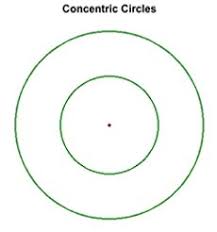