Introduction to Rationalize the Denominator

A rational number is any number which is in the form of p/q where p is not equal to 0. Its a number whose expression is as the quotient or fraction p/q of two integers, such that it has a numerator p and a non-zero denominator q. 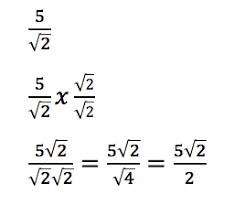 Why do you Rationalize Denominator?

As we discussed above, that all the positive and negative integers including zero are considered as rational numbers. To exemplify this let us take the example of number 5. 5 can be written as 5/1. Here, we can clearly see that the number easily got expressed in the form of p/q and here q is not equal to 0.

Even 0 can be written as 0/1 and we can clearly see that 0 is also a rational number as it can be expressed in the form of p/q and here q is not equal to 0.  However, what about irrational numbers.

Lets take the example of a number such as 1/√2, which is an example of an irrational number. Therefore to rationalize this numerical expression we need to follow these steps:-

Multiply both the numerator and denominator with √2 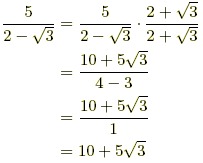 Another example that we can take of an irrational number can be  1/ (3-√2). To convert this type of numerical expression into a rational number we need to follow the given steps:

First and foremost we need to multiply both the numerator and the denominator we the conjugate of (3-√2) which equals to (3+√2).

which further equates to 7.

Question: Convert 1/(5+√2)  into a rational number by rationalizing the denominator.

Answer: Multiplying the numerator and denominator with

Therefore we get the result as 1/23 which is a rational number.

Hence, with this lesson, we learnt how to rationalize the denominator and making a numerical expression rational.

Share with friends
Previous
Climate Zones - What are Differnet Climate Zones?
Next
What is Natural Logarithm and How to Calculate it?

Sir how do u write on the miror you awsome bro