Real Life Example of a Fraction

It’s your birthday and mom has ordered pizza for you and your friends. When the pizza arrives, you open the box and find that it is cut into slices. Let’s assume that there are 8 slices and you have 7 friends. So, there are 8 people who are going to eat the 8 slices of the pizza. 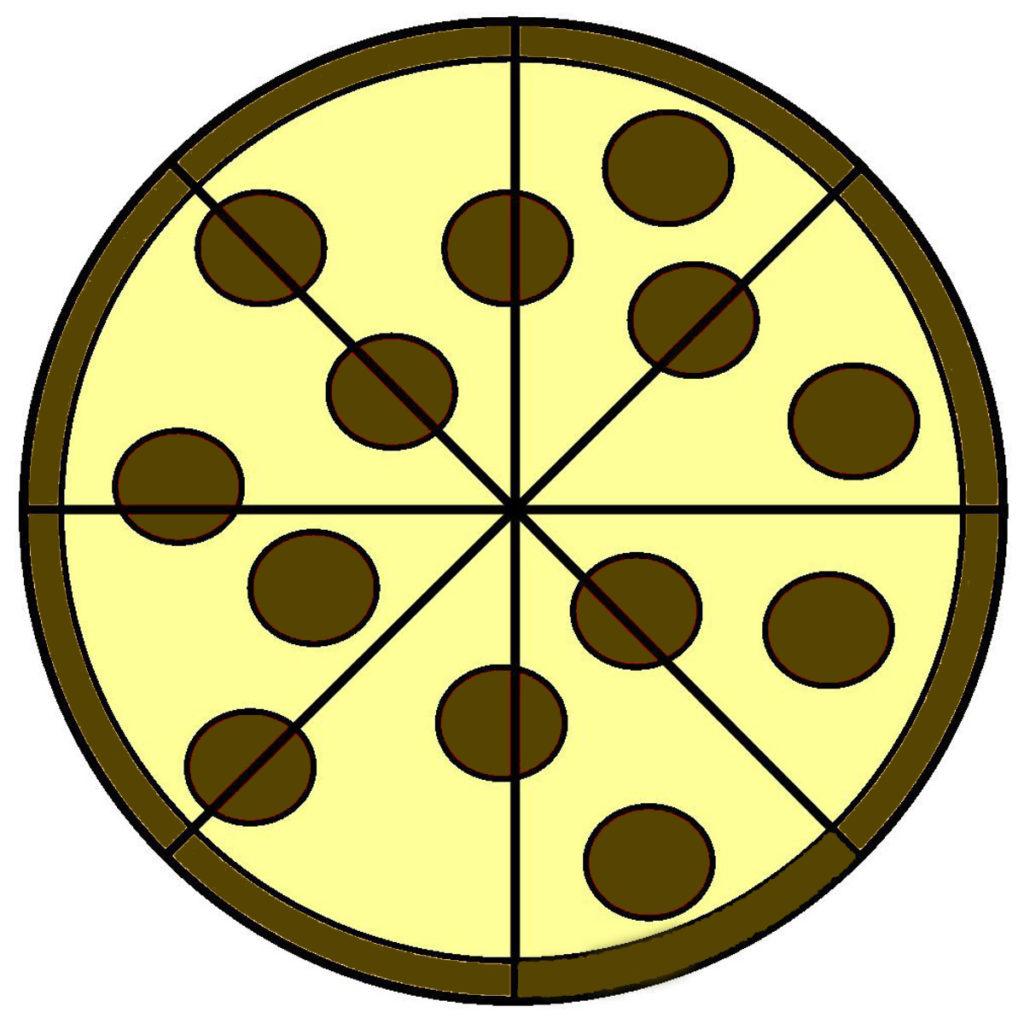 Fractions on a Number Line

Fractions can also be shown on a number line just like whole numbers. Let’s try and plot 1/2 on a number line. Now, we know that 1/2 is greater than 0 but lesser than 1. Hence, it lies between 0 and 1. Further, since the denominator is 2, we divide the distance between 0 and 1 into two equal parts. Refer diagram below:

Let’s look at one more example. How can we show 2/3 on a number line? Again, we know that 2/3 is greater than 0 but less than 1 (since the numerator is smaller than the denominator). Next, since the denominator is 3, we divide the distance between 0 and 1 into three equal parts. Now, 2/3 is two parts out of these three parts as shown below:

In a fraction there are two simple possibilities:

When the numerator is smaller than the denominator, it is a Proper Fraction. These fractions are less than 1 and none of them lies beyond 1 on the number line. The denominator represents the number of equal parts in which the whole is divided.

And, the numerator represents the number of these equal parts that are considered. The example of the pizza stated above with each person getting 1/8th of the pizza shows a proper fraction.

Ram, Rachna, Rohini, and Ravi decide to eat some apples. They go to Ram’s house and his mother hands them a basket of apples. They sit in the garden to eat them. On opening the basket, they find that there are 5 apples inside. How can they share these 5 apples among the four of them?

Ram picks up a knife and cuts all apples into four equal parts. Then, he distributes one part of each apple to everyone. Hence, each of them receives one part of all 5 apples. So, the number of apples per person = 5/4

Taking the same example as above, Rachna suggests that they can take one apple each which leaves them with one extra apple. Now, she divides the apple equally into four parts and gives one part to everyone. Hence, the 5 apples are equally divided among them. To put it in an equation,

This is a Mixed Fraction since it has a combination of a whole and a ‘part’. An improper fraction can be expressed as a mixed fraction by dividing the numerator by the denominator and obtaining the quotient and remainder.

Hence, the fraction can be written as 5/4 = 1 ¼ or Quotient (Remainder/Divisor)

Some Other Types of Fractions

The above diagram represents 1/2, 2/4 and 3/6. If we were to place all three squares on top of one another, do they look equal? Yes, of course. Hence, they are equal. Such fractions are Equivalent Fractions since they represent the same part of a whole. You can check the equivalence between fractions by calculating the simplest form of each fraction.

Unlike fractions with the same numerator

Let’s compare 1/3 and 1/5. These are unlike fractions (different denominators) but have the same numerator (1).

Hence, 1/3 > 1/5. So, if the numerator is the same in two unlike fractions, the fraction with the smaller denominator is greater than that with a larger denominator.

Unlike fractions with different numerators

Tip: Find the LCM of the denominators for faster calculations.

Adding two or more like fractions are done by following these steps:

Also, subtracting two or more like fractions is done by following these steps:

As we learned in comparing, adding or subtracting unlike fractions is done by finding equivalent fractions with a common denominator and then applying the rules for like fractions. So, the sum of 1/5 and 1/2 is calculated as follows:

Question 1: Asha and Samuel have bookshelves of the same size partly filled with books. Asha’s shelf is 5/6th full and Samuel’s shelf is 2/5th full. Whose bookshelf is more full? By what fraction?

Question 2: What is a Fraction?

Answer: Fractions are numbers representing a part of the whole. When we divide an object or group of them into equal parts, then each individual part is referred to as a fraction. We usually write down fractions as ½ or 6/12 and more. Moreover, it divides into a numerator and denominator.

Question 3: What is the Proper Fraction?

Answer: A proper fraction is when the numerator is smaller than the denominator. They are less than 1 and not a single one of them lie beyond 1 on the number line. Moreover, the denominator is known to represent the number of equal parts in which we divide the whole.

Question 4: What is an Improper Fraction?

Answer: Improper Fraction is on where the numerator is larger than the denominator. Similarly, improper fractions are greater than 1 and on the number line, they lie beyond 1. You can use them when more than one object divides equally into specific parts.

Question 5: How do we add fractions?

Answer: When you need to add two or more fractions, you need to first add the numerators of all the similar fractions then retain the denominator. A denominator is common throughout all the like fractions.