In engineering education, Isometric Sketching or isometric drawing is a popular term. It is the pictorial representation of an object in which all the three-dimensions are drawn at the full scale of it. It is similar to the isometric projection. In such a case, all the lines parallel to the major axes are measurable. In this article, we will explain the concept of isometric drawing with related terms and examples. Let us learn this interesting concept! 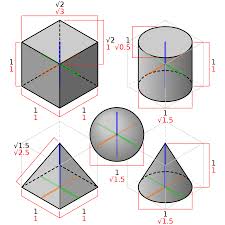 What is Isometric Sketch?

Three-dimensional objects are represented on the two-dimensional plane easily with proper drawing. Oblique sketching is the method of representing 3-D objects on the simple 2-D plane. To remove the obvious limitations, the isometric sketch is very popularly in use. It portrays the exact measurement of the object along with the projection of its image in the 2-D plane.  Isometric sketch allows for drawing an object in the three-dimensions. Illustrators and engineers for specializing in the technical drawings often use such sketching.

Some fundamental rules for the isometric sketching are as follows:

Draw the isometric sketch of a cuboid given dimension as l × b × h, on the isometric dot paper. It is frequently in use in many professions like Game Design, Building Architecture, Interior design, and Infographics, etc. Isometric sketches are also useful in the situation when someone has to show ideas in mind to other people. Therefore it is very helpful to project the designs and innovative ideas effectively.

Example-1: What is isometric projection?

Example-2: What is isometric drawing in AutoCAD?

Solution: AutoCAD is a very important tool in the Mechanical Engineering domain. An AutoCAD isometric drawing is the 2-D drawing similar to the paper drawing. AutoCAD provides some automated tools to aid us in creating the drawing, but not many. Normally, we will be using the same commands which we used in creating orthographic drawings.

Solution: Isometric projection is useful for visually representing 3-D objects in two dimensions. It is popular in technical and engineering drawings. It is the axonometric projection in which the three coordinate axes appear equally foreshortened. And also the angle between any two of them is \(120^P{0}\).