Greater Than and Less Than Symbols 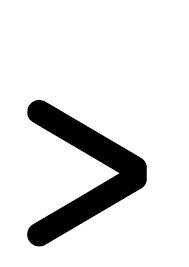 Symbols of Greater Than Less Than

When we have, two values that are not equal are symbols that we can use to indicate relationships between numbers they are the inequality symbols. The symbols of inequality are greater than and less than. With them, we can make comparisons.

Less than: When one number is smaller than the other number, we use less than sign < i.e smaller number < bigger number. With the help of less than symbol expresses that the number to the left is less than the one to the right. For example, 12 is less than 16, so we write it like 12<16.

Equal to: This symbol, used to express that the value of two quantities is equal. The symbol of equal to is =.

Less Than or Equal to: This sign generally used at the places where we have to specify the quantity. It means that the value should equal either to the given value or less than the given value. The less than or less than the symbol used is \leq. For example, A jug can hold up to 4 cups of water. This means that jug can hold 4 cups of water or it could be less than 4 cups. In mathematical form, we can write it as capacity \leq 4.

The trick to Remember Greater Than Less Than Sign:

The greater than and less than signs resemble the letter v rotated. This trick can help you to know which way it should be rotated. The large opening always points to the greater value, and the smaller end, the tip, toward the smaller value. For examples:

3 > 2: Three is greater than two, so the large opening of the symbol faces three and the little point faces the two.