We come across angles in our everyday life. We see angels all around us, like the space between our fingers, also while crossing the roads. Have you observed the alphabet A? We can see three angles in this alphabet. Such angles are also found in the alphabets H, L and many more. We can see the angles in the rooms of our houses, school and offices. Let us now understand this better by studying the topic angles and types of angles in detail.

Table of content
1 Suggested Videos
2 What is an Angle?
2.1 Browse more Topics under Lines And Angles
3 Types of Angles
3.1 1. Right Angle
3.2 2. Acute Angle
3.3 3. Obtuse Angle
4 Other Types of Angles
5 Solved Examples for You

What is an Angle?

There are many different types of angles. Let us study them carefully.

An angle which is more than a right angle and which measures greater than 90° is an obtuse angle. This angle lies between 90 degrees and 180 degrees. A door when kept wide open forms an obtuse angle. In the figure given below, you can see the obtuse angle with the measure of more than 90°. 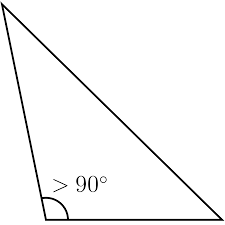 Other Types of Angles

Question 1: There is three angle formed at a point. If one of the angles is the right angle, the second angle is the straight angle, then the third angle must be

Question 2: What are the 5 types of angles?

Question 3: What is the angle?

Question 4: What are the positive and negative angles?

Answer: A straight angle refers to an angle that has a measure of 180 degrees. Thus, you can say that a straight angle resembles a straight line. Moreover, it is collinear and opposite rays. For instance, when you have a thin book and you keep that open, you will notice it forms an angle between the two pages which make up a straight angle.