Do you know what Parallel Lines are? You will understand this with the following examples. Every one of you must have seen the pair of railway tracks or a ladder or piano keys. What is one common thing among all these? The two tracks never meet each other, also the two sides of the ladder never intersect each other. The keys of the piano are always parallel to each other. Let us now study parallel and transversal lines and corresponding angles in detail.

Table of content
1 Suggested Videos
2 Parallel Lines
2.1 What are the lines and line segments?
2.2 Browse more Topics under Lines And Angles
2.3 What are Parallel Lines?
2.4 What is a Transversal?
3 1. Corresponding Angles
3.1 2. Alternate Angles
3.2 Properties of Transversal
4 Solved Examples for You

What are the lines and line segments?

What are Parallel Lines?

When the distance between a pair of lines is always the same, then we call such lines as parallel lines. The symbol for “parallel to” is “// “. Parallel lines are the lines which never meet each other. For the two lines to be parallel, the most important thing is that they are drawn in the same plane. These lines are always equidistant from each other.

What is a Transversal? 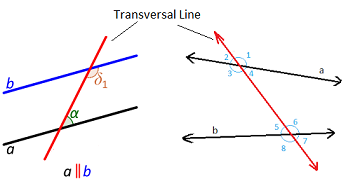 A transversal is a line that passes through two lines lying in the same plane at two distinct points. In the transversal, the two given lines may be parallel or non-parallel. The angles formed when a transversal intersects two lines are as follows:

When two parallel or non-parallel lines in a plane are cut by a transversal, some angles are formed as shown in the figure below 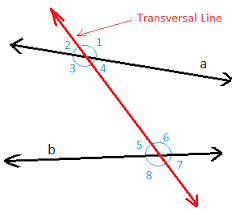 Here we have two lines that are parallel to each other. These two lines are the line a and line b. We can see one more line that intersects these two lines at two different points.  There are two points of intersection, which can see clearly in the above figure. As the transversal line intersects the two parallel line, we see that the angles below.

The following are the pairs of corresponding angles:

When two parallel or non-parallel lines in a plane are cut by a transversal, some angles are formed as shown in the previous figure. The following are the pairs of alternate angles:

A pair of parallel lines is intersected by a transversal. Following are the properties:

Question 2: If l is any given line an P is any point not lying on l, then the number of parallel lines drawn through P, parallel to l would be:

Question 2: Identify the given angle in the diagram. 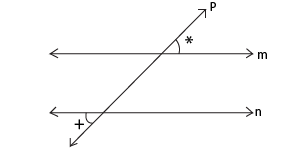 Answer : The correct option is D. The angles opposite to the sides of the transversal line and which is exterior is Alternate Exterior Angles.

Question 3: What is an example of a corresponding angle?

Question 4: What is the sum of two corresponding angles?

Question 5: What is a transversal?

Answer: A transversal refers to a line which passes through two lines lying in the same plane at two different points. Moreover, in the transversal, the two certain lines can be parallel or non-parallel. Thus, the angles which form when a transversal intersects two lines are corresponding angles and alternate angles.

Question 6: State the properties of a transversal.