Lines are the most basic shape that we learn about in Geometry. Almost all the shapes are formed when multiple lines come together in particular positions and orientations. In this chapter, we’ll learn all about a pair of lines, their properties and so on.

A pair of lines, line segments or rays are intersecting if they have a common point. This common point is their point of intersection. For example, two adjacent sides of a sheet of paper, a ruler, a door, a window and letters.

If a pair of lines lie in the same plane and do not intersect when produced on either side, then such lines are parallel to each other.

Note that the distance between two parallel lines is the same everywhere. For example a railway track, opposite sides of a blackboard, two opposite edges of a door etc.

Let us study  Parallel lines and Transversal lines in detail.

Question 1: Give an example of intersecting lines and parallel lines from your surroundings.

Question 2: In the adjoining figure- 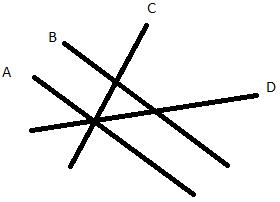 Question 5: How many transversals can you draw on any two given lines?
Answer : Infinitive

Question 6: If a line is a transversal to 4 lines, at how many points will it intersect them?
Answer : 4 points

Question 8: Which pairs of lines are parallel?

Answer: Commonly, the equation of the straight line is y = mx + c, where m is the gradient, and y = c is the value where the line cuts the y-axis. Moreover, we call this number c the intercept on the y-axis.

Question 10: What is a straight line in mathematics?

Answer: It refers to a set of all points between and extending beyond two points. Furthermore, two properties of straight lines in Euclidean geometry are that they have only one dimension, length, and they extend in two directions forever.

Question 11: How to prove that two lines are perpendicular?

Answer: They are perpendicular when their slopes are negative reciprocals. In addition, for finding the slopes, we must put the equation into slope-intercept form, y = mx + c where m equals the slope of the line.