What if two matrices have the same set of elements? Will they be necessarily considered equal? Certainly not! This is because their order may be different. Transpose is a matrix formed by swapping the rows into columns and vice-versa. Sounds interesting right? Let’s learn about it in further more detail. 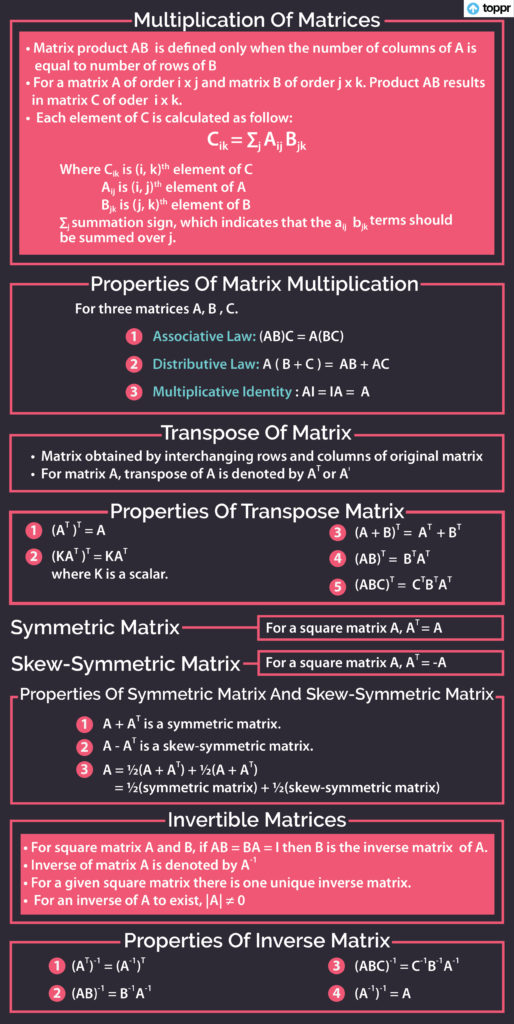 Verify that (AT)T = A. It is determined as shown below:

2) Transpose of a Scalar Multiple

3) Transpose of a Sum

The transpose of the sum of two matrices is equivalent to the sum of their transposes: (A + B)T = AT + BT. For example:

The transpose matrices for A and B are given as below:

4) Transpose of a Product

Solution: The product of A and B is:

If we take the transpose of A and B separately and multiply A with B, then we have:

Learn the Types of Matrix here.

Question 2: What is a transpose?

Answer: The new matrix that we attain by interchanging the rows and columns of the original matrix is referred to as the transpose of the matrix.

Question 3: Is transpose and inverse the same?

Answer: A matrix has an inverse if and only if it is both squares as well as non-degenerate. Thus, this inverse is unique. Moreover, the inverse of an orthogonal matrix is referred to as its transpose. They are the only matrices that have inverses as same as their transpositions.

Question 4: Can you transpose a non-square matrix?

Answer: Yes, you can transpose a non-square matrix. However, you just have to make sure that the number of rows in mat2 must match the number of columns in the mat and vice versa. In other words, if the mat is an NxM matrix, then mat2 must come out as an MxN matrix.

Question 5: What is the transpose of a vector?