You must have played hide and seek a number of times. In this game, you have to find your hidden friends. Finding factors and multiples is like playing hide and seek with numbers. You have the number, yet you have to seek the hidden factors and multiples through the concept of HCF and LCM. The chapter below shall make the game of hiding and seek with numbers easy. 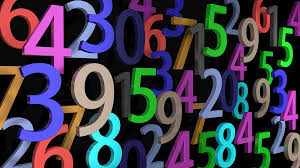 The listing method involves the process of listing the factors of the given numbers. For example, find the HCF of 20 and 35.

When we find HCF by prime factorization method, we are finding the greatest common factor among the prime factors or numbers. Steps to be followed for the method are: 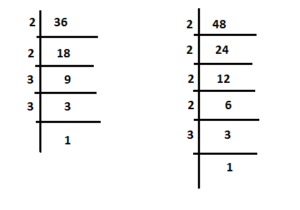 Step 3: Multiply all the common factors to get the HCF of the given numbers:

To find the LCM using prime factorization method we need to follow the below-mentioned steps:

Let us use the steps in the following example: find the LCM of 8 and 24.

Step 1: First find the prime factors of the numbers 8 and 24 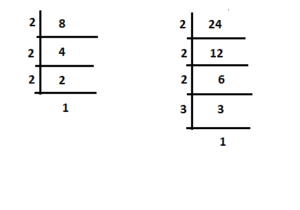 For calculating the LCM by division method we need to follow the below mentioned steps:

Step 1: Rewrite the numbers in a row separated by commas. 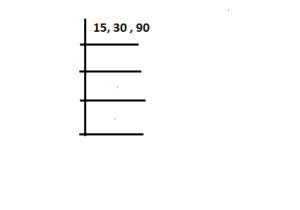 Step 2,3 and 4: Find the prime factors, the number with no quotients is written as it is. The step is repeated until we reach the stage where no prime factors are possible to find. Solved Question for You on HCF and LCM

Question 1: The LCM and HCF of two numbers are 156 and 4 respectively. If one number is 52 find the other number.

So, the required answer is 12.

Question 2: How can one calculate the HCF?

Answer: One can find the highest common factor by carrying out the multiplication of all the factors which appear in both lists. Therefore, the HCF of 60 and 72 is 2 × 2 × 3 which turns out to be 12.

Question 3: What is the use of LCM?

Answer: LCM can be used before the addition, subtraction, or comparison of fractions can take place. The LCM of more than two integers also happens to be well-defined: it is the smallest positive integer whose division can take place by each of them.

Question 4: Who is credited with developing the method for finding HCF?

Answer: Euclid is credited with developing the method for finding HCF.

Question 5: Tell about the formula of finding the HCF?

Answer: Greatest Common Measure(GCM) and Greatest Common Divisor(GCD) are the terms that an individual can use it to refer to HCF. For example, HCF of 60 and 75 = 15 as 15 happens to be the highest number which can divide both 60 and 75 in an exact manner. One can find HCF by making use of the prime factorization method or by using the division method.