You are at one end of the amusement park and your friend is at the other end. There are two ways you can reach your friend, either you go west for 3 miles and then walk north for another 4 miles which makes it a total of 7 miles, or you go right through the centre of the amusement park walking diagonally. You need to find the distance you need to travel for the second option. How do you do it? Well, you take the help of the Pythagoras Theorem…

Let’s have a look at what Mr Pythagoras stated when he came up with the Theorem,

Statement: In a right-angled triangle, the square of the hypotenuse is equal to the sum of the squares of the remaining two sides.

To understand it better we break down the statement. 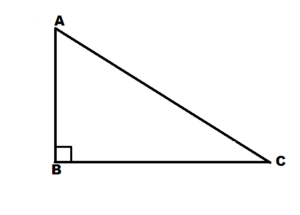 In the diagram above,

∠ABC is a right angle.

AC is the hypotenuse.

AB is known as the perpendicular.

BC is the base.

So according to the Pythagoras Theorem,

But then should we merely trust a single statement? I don’t think so. We need proof!

Proof of the Pythagoras Theorem using Similarity of Triangles: 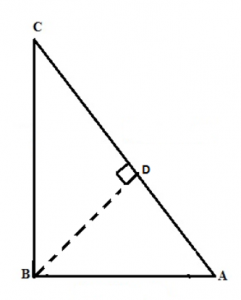 Construction: BD is a perpendicular on side AC

There also exists a Converse of the Pythagoras theorem that states, “If the square of one side of a triangle is equal to the sum of the squares of the other two sides, then the triangle is a right triangle”.

Now that we proved the theorem lets work with some examples to understand it better.

Q: In a right-angled triangle △LMN, LM is 3, MN is 4 find the hypotenuse LN.

Since △LMN is a right-angled triangle, we use the Pythagoras theorem to find the hypotenuse.

Q: In a right-angled triangle △PQR, PQ is 5, hypotenuse PR is 13 find the base QR.

Since △PQR is a right-angled triangle, we use the Pythagoras theorem to find the SIDE QR.

Pythagorean Triples are a set of 3 numbers (with each number representing a side of the triangle) that are most commonly used for the Pythagoras theorem.

Let us assume a to be the perpendicular, b to be the base and c to be the hypotenuse of any given right angle triangle.

The following is a list of some of the commonly used Pythagorean Triples.

Let us try solving them.

Scaling up the Triples

The primitive Pythagorean Triples can be scaled up to create further sets of triples.

Question- What is Pythagoras theorem used for?

Answer- We use the Pythagoras theorem for two-dimensional navigation. It is useful in finding out the shortest distance with the help of two lengths. Thus, you see that distances north and west are the two legs of the triangle so the shortest line which connects them is diagonal.

Question- What does Pythagoras theorem mean?

Answer– Pythagoras theorem in geometry refers to the square of the length of the hypotenuse of a right triangle which equals the sum of the squares of the lengths of the other two sides.

Question- How do I find the length of a triangle?

Answer- You can make use of Pythagoras’ Theorem to find the length of a triangle. We see that the hypotenuse is the longest side of a right triangle. It is situated opposite the right angle. Thus, if you are aware of the lengths of the two sides, you just need to square these two lengths. Then, add the result and take the square root of the sum to get the length of the hypotenuse.