In view of the coronavirus pandemic, we are making LIVE CLASSES and VIDEO CLASSES completely FREE to prevent interruption in studies
Maths > Triangles > Basic Proportionality Theorem and Equal Intercept Theorem

Basic Proportionality Theorem: If a line is parallel to a side of a triangle which intersects the other sides into two distinct points, then the line divides those sides in proportion. Let’s not stop at the statement, we need to find a proof that its true. So shall we begin?

Basic Proportionality Theorem was first stated by Thales, a Greek mathematician. Hence it is also known as Thales Theorem. Thales first initiated and formulated the Theoretical Study of Geometry to make astronomy a more exact science. What is this theorem that Thales found important for his study of astronomy? Let us find it out.

Basic Proportionality Theorem (can be abbreviated as BPT) states that, if a line is parallel to a side of a triangle which intersects the other sides into two distinct points, then the line divides those sides in proportion. In the figure alongside, if we consider DE is parallel to BC, then according to the theorem,

Let’s not stop at the statement, we need to find a proof that its true. So shall we begin?

Given: In  ΔABC, DE is parallel to BC

Construction: Draw EF ⟂ AD and DG⟂ AE and join the segments BE and CD.

The BPT also has a converse which states, if a line divides any two sides of a triangle in the same ratio, then the line is parallel to the third side.

(Note: A converse of any theorem is just a reverse of the original theorem, just like we have active and passive voices in English.)

Read the properties of Triangles and Quadrilaterals here.

The BPT has 2 properties.

Property of an Angle Bisector

Statement: In a triangle, the angle bisector divides the side opposite to the angle in the ratio of the remaining sides. 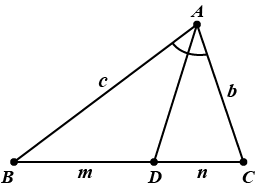 In the given figure, seg AD is the angle bisector of ∠BAC.

According to the property,

Property of Intercepts made by three parallel lines on a transversal Consider the above figure,  line l, m, and n are parallel to each other. Transversals p and q intersect the lines at point A, B, C and D, E, F. So according to the property, Hence, by the converse of basic proportionality theorem, we have MN parallel to QR.Question 3: What is BPT in triangles?

Question 4: What is the corollary of BPT?

Answer: It is a transversal that is parallel to a side in a triangle that defines a new smaller triangle that is similar to the original triangle. In it proof the corresponding angles of the two triangles are congruent.

Question 5: What is a triangles similarity theorem?