Properties of triangles are generally used to study triangles in detail, but we can use them to compare two or more triangles as well. With the help of these properties, we can not only determine the equality in a triangle but inequalities as well. Let’s see how!

Triangles are three-sided closed figures. Depending on the measurement of sides and angles triangles are of following types:

Depending on angles, triangles are of following types:

When we study the properties of a triangle we generally take into consideration the isosceles triangles, as this triangle is the mixture of equality and inequalities. Let’s see the figure given below before studying further about properties of triangles. 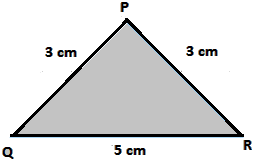 The following properties of triangles shall make the concept more clear to you:

1. Angles opposite to equal sides of an isosceles triangle are also equal

In an isosceles triangle XYZ, two sides of the triangle are equal. We have XY=XZ. Here we need to prove that ∠Y =∠Z. Let’s draw the triangle first, with a point W as the bisector of ∠X. 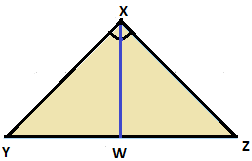 2. The sides opposite to equal angles of a triangle are also equal

This property is the converse of the above property. For this, we need to measure the sides of the triangle with scale and angles with a protractor. On measuring the sides and angles respectively we come to the conclusion that the sides opposite to equal angles are also equal. We use the ASA congruence rule to prove the property.

Question 1: The figure below shows a triangle PQR with PQ=PR, S and T are two points on QR such that QT=RS. Show that PS=PT. Question 2: What is called a triangle?

Question 3: How many types of triangles are there?

Answer: Triangles are shapes with three sides. There are different names for the types of triangles. A triangle’s type depends on the length of its sides and the size of its angles (corners). There are three types of a triangle based on the length of the sides: equilateral, isosceles, and scalene.

Question 4: What is a unique triangle?

Answer: The triangle was invented by Blaise Pascal in 1653. Although it has been named after Blaise Pascal, there have been traces of the triangle, long before Blaise Pascal was born. It is believed that the Persians and the Chinese had been using it to find the square and cube root of numbers.

Share with friends
Previous
Straight Lines
Next
Inequalities of Triangle