Angular momentum is basically the product of the moment of inertia of an object and its angular velocity. Furthermore, both the quantities must be about the equal and the same axis i.e. the rotation line. 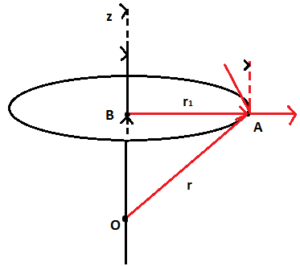 Derivation of the Angular Momentum Formula

We have Newton’s second law:

This is very similar to the other form of the second law of newton:

We can read it as: a force provides us the rate of change of the momentum.

A force applied around an axis generates a rate of change of the momentum about the similar axis. This means we identify the left-hand side of the above equation with the torque \(\vec{\tau}\) and the quantity inside the brackets of the right-hand side with the angular momentum \(\vec{L} = \vec{r} \times m\vec{v}\), So we can also write the above equation as:
\(\vec{\tau } = \frac{d}{dt}\vec{L}\)

So in a sense, it’s in comparison with the second law of newton that we define this quantity like angular momentum.

A basketball spinning on the finger of an athlete has angular velocity \(\omega\) = 120.0 rad/s. The moment of inertia of a sphere that is hollow, where M is the mass and R is the radius. If the basketball has a weight of 0.6000 kg and has a radius of 0.1200 m, what is the angular momentum of this basketball?