Moment of inertia also known as the angular mass or rotational inertia can be defined w.r.t. rotation axis, as a quantity that decides the amount of torque required for a desired angular acceleration or a property of a body due to which it resists angular acceleration. The formula for the moment of inertia is the “sum of the product of mass” of each particle with the “square of its distance from the axis of the rotation”. The formula of Moment of Inertia is expressed as I = Σ miri2.

What is Moment of Inertia

The moment of inertia of an object is a determined measurement for a rigid body rotating around a fixed axis. The axis might be internal or external, and it can be fixed or not. However, the moment of inertia (I) is always described in relation to that axis.

Angular mass or rotational inertia are other names for the moment of inertia.

The SI unit of moment of inertia is kg m2.

Imagine you are on a bus right now. You find a seat and sit down. The bus starts moving forward. After a few minutes, you arrive at a bus stop and the bus stops. What did you experience at this point? Yes. When the bus stopped, your upper body moved forward whereas your lower body did not move.

Similarly, when you board a moving train, you experience a force that pushes you backwards. That is because before boarding the train you were at rest. As soon as you board the moving train, your lower body comes in contact with the train but your upper body is still at rest. Therefore, it gets pushed backwards, that is, it resists change in its state.

Understand the Theorem of Parallel and Perpendicular Axis here in detail.

Browse more Topics Under System Of Particles And Rotational Dynamics

What is Inertia? It is the property of a body by virtue of which it resists change in its state of rest or motion. But what causes inertia in a body? Let’s find out.

Inertia in a body is due to its mass. More the mass of a body more is the inertia. For instance, it is easier to throw a small stone farther than a heavier one. Because the heavier one has more mass, it resists change more, that is, it has more inertia.

m = Sum of the product of the mass.

r = Distance from the axis of the rotation.

And the Integral form of MOI is as follows:

dm = The mass of an infinitesimally small component of the body

Moment of Inertia of a System of Particles

For a system of point particles revolving about a fixed axis, the moment of inertia is:

where ri is the perpendicular distance from the axis to the ith particle which has mass mi.

A system of point particles is shown in the following figure. Each particle has a mass of 0.3 kg and they all lie in the same plane. What is the moment of inertia of the system about the given axis? 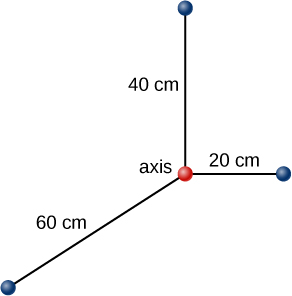 Moments of Inertia for Different Objects 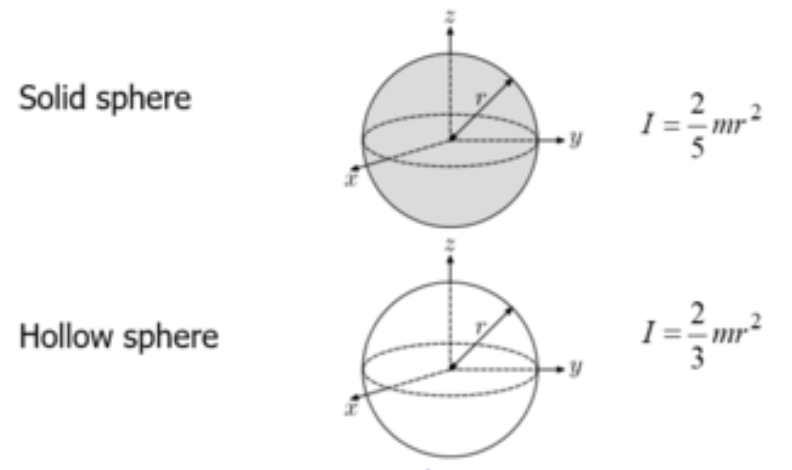 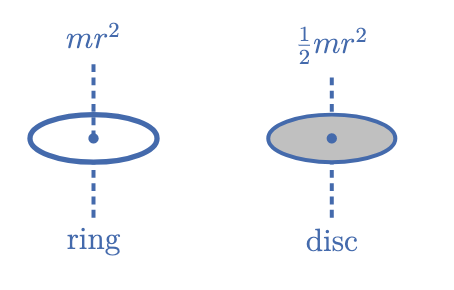 The moment of inertia, as we all know, is affected by the axis of rotation. After selecting two distinct axes, you will notice that the object resists the rotational change differently. As a result, the following theorems can be used to calculate the moment of inertia along any given axis:

I = moment of inertia of the body

Ic = moment of inertia about the center

M = mass of the body

h2 = square of the distance between 2 axes

Let us see how the Parallel Axis Theorem helps us to determine the moment of inertia of a rod whose axis is parallel to the axis of the rod and it passes through the center of the rod.

Moment of inertia of rod is given as:

The distance between the end of the rod and its centre is:

Therefore, the parallel axis theorem of the rod is: 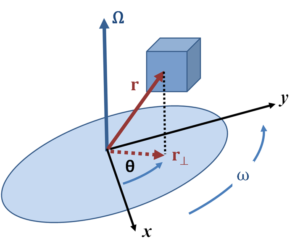 Consider a particle of mass m at a distance from the axis with linear velocity = vi = riω. Therefore, the kinetic energy of this particle is,

where mi is the mass of the particle. The total kinetic energy K of the body is thus the sum of the kinetic energies of individual particles. ∴ K = Σ ki = 1/2 ( Σ mi(ri )2ω2) where n is the number of particles in the body. We know that angular acceleration ω is the same for all particles. Therefore, taking ω out of the sum, we get,

Let Σ mi(ri )2 be I which is a new parameter characterising the rigid body known as the Moment of Inertia.  Therefore, with this definition,

The parameter I is independent of the magnitude of the angular velocity. It is the characteristic of the rigid body and the axis about which it rotates. We already know that linear velocity in linear motion is analogous to angular acceleration in rotational motion.

On comparing equation II with the formula of the kinetic energy of the whole rotating body in linear motion, it is evident that mass in linear motion is analogous to the moment of inertia in rotational motion. Hence, the question is answered. In simple words, the moment of inertia is the measure of the way in which different parts of the body are distributed at different distances from the axis.

As a measure of the way in which the mass of a rotating rigid body is distributed with respect to the axis of rotation, we define a new parameter known as the radius of gyration. It is related to the moment of inertia and the total mass of the body. Notice that we can write I = Mk2 where k has the dimension of length.

Here are a few Solved Questions for You

Question 1. The moment of inertia depends on:

Answer: d) all of the above. All the factors together determine the moment of inertia of a body.

Question 2: Find the moment of inertia of a disc of mass 5 kg and radius 30 cm about the following axes.

Question 3: Determine the moment of inertia about the geometric centre of the given construction, which consists of a single thin rod connecting two identical solid spheres as shown in the figure.

The above image consists of 3 structures: 1 thin rod and 2 solid spheres.

The moment of inertia of the rod about its center of mass is,

The moment of inertia of the sphere about its center of mass is,

But the moment of inertia of the sphere about the geometric center of the structure is,

As there is one thin rod and 2 similar solid spheres,

Hence, the moment of inertia of the given construction figure is 2.7 kg m2.