Browse more Topics Under System Of Particles And Rotational Dynamics

For understanding the relation between the two, we need to consider the following figure: 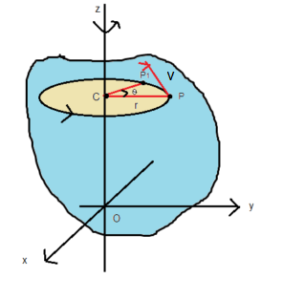 At smallest time interval of displacement, for example, when Δt=0 the rotational velocity can be called an instantaneous angular (ω) velocity, denoted as dt/dθ for the particle at position P. Hence, we have ω = dt/dθ

Linear velocity (v) here is related to the rotational velocity (ω ) with the simple relation, v= ωr, r here is the radius of the circle in which the particle is moving.

Angular Velocity of a Rigid Body

When a rigid body rotates around an axis, after the lapse of some time it completes a revolution. The time taken by that rigid body to complete a revolution is called the frequency of that body. Rotational velocity and frequency hence have a relation between each other. Here one revolution is equal to 2π, hence ω= 2π/ T

When an object follows a rotational path, it is said to move in an angular motion or the commonly known rotational motion. In the course of such motion, the velocity of the object is always changing. Velocity being a vector involves a movement of an object with speed that has direction. Now, since in a rotational motion, the particles tend to follow a circular path their direction at every point changes constantly. This change results in a change in velocity. This change in velocity with time gives us the acceleration of that object.

1. The angular velocity of a scooter tire of diameter 6 inches rotates 6 times a second is: