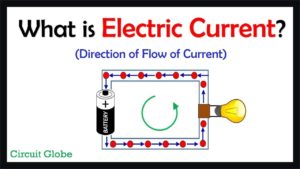 What is the Electric Current?

The conducting material consists of a large number of free electrons which is moving from one atom to the other at random. When the potential difference is applied across a wire, then loosely attached free electrons will start moving towards the positive terminal of the cell.

This continuous flow of electrons makes the existence of the electrical current. Therefore the flow of currents in the wire is from the negative terminal to the positive terminal through the external circuit.

The Formula for Electric Current

The magnitude of the flow of current at any section of the conductor is defined as the rate of flow of electrons.

Mathematically, this can be represented as:

Since we measure the charge in coulombs and time in seconds, therefore the unit of electric current is coulomb/Sec or amperes. The amperes is the SI unit of the electric current. The symbol for electric current is I. Thus, an electric wire is said to carry a current of 1 ampere when charge flows through it with the rate of one coulomb per second.

Q.1: Calculate the electric current passing through the circuit in which the voltage and resistance be 25V and 5 \( \omega\)  respectively?

Here, we have to apply ohm’s law formula.

The equation for the electric current using Ohm’s law is,

Putting the known values, we get

Thus the value of electric current is 5 A.