The conventional direction of electric current is taken as opposed to the direction of flow of electrons. If a charge Q flows through the cross-section of a conductor in time t, the current I then I=Q/t. The S.I unit of charge is coulomb and measurement of electric current happens in units of coulomb per second which is ‘ampere’. The current flows from the negative terminal to the positive terminal of the cell. 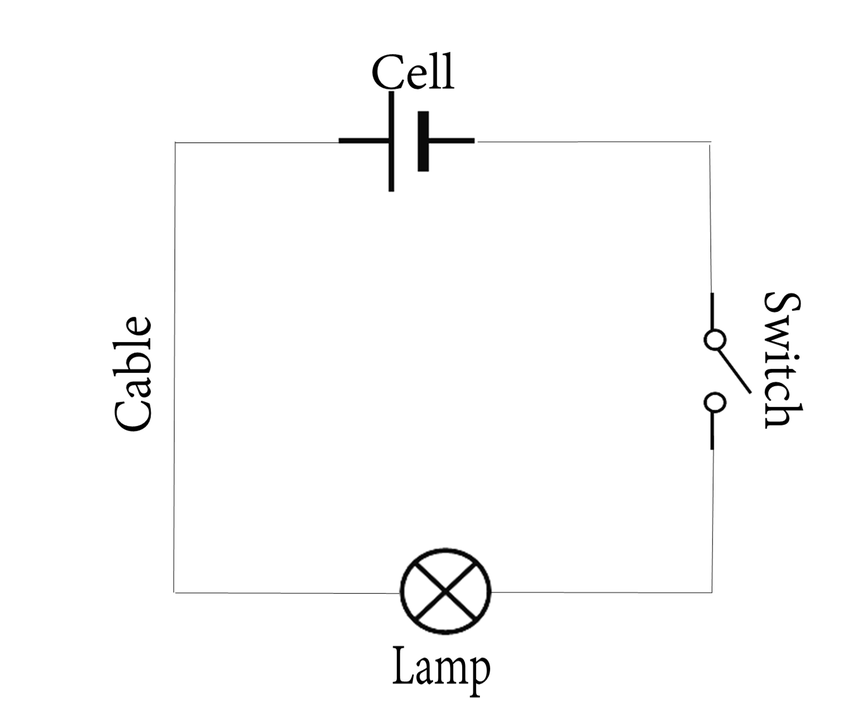 This is a simple electric circuit. It has a lamp, a switch, and a cell.

In a torch, the battery provides the flow of charges which means the bulb in the torch glows due to the electric current. What does a switch do? The switch creates a conducting link between the cell and the bulb. If the circuit breaks, then the current stops flowing immediately and the bulb does not glow.

What is a flow of current?

When a small amount of electric charge is placed in the electric field due to another charge, it experiences a force. So work has to be done on the positive charge. In electrolytes and ionized gases, both the positively charged ions and negatively charged ions are moving and this constitutes the electric current. If n electrons pass through the cross-section of a conductor in time t, the total charge that passes through the conductor is then,  Q = n×e.

The schematic diagram represents the different components of a circuit; this is the circuit diagram. These symbols represent the common electrical components.

Q. A current of 0.75 A is drawn by the filament of an electric bulb for 10 minutes. Find the amount of electric charge that flows through the circuit.

Q. What constitutes current in a metal wire?