All of us know that the like charges repel each other and unlike charges attract each other. Some work is always involved in moving a charge in the area of another charge. What makes the charge to flow? Well, this basically happens because of the ‘Electric Potential’. Let us study more about it below.

Table of content
1 Suggested Videos
2 Electric Potential
2.1 Download Electric Current and Circuit Diagrams Cheat Sheet PDF
2.2 Browse more Topics Under Electricity
3 Potential difference
3.1 What happens when the battery is in connection with the circuit?
4 Solved Example For You

If two charged bodies are in contact, the charge starts flowing from one conductor to other. The electric condition, that determines the flow of charge from one conductor to other in contact, is the electric potential. Electric potential is comparable to level in case of water, the temperature in case of heat and pressure in the case of fluids. Earth is a conductor that can hold an infinite charge and can give infinite charge without changing its potential.

The S.I unit of work is joule and that of the charge is coulomb. 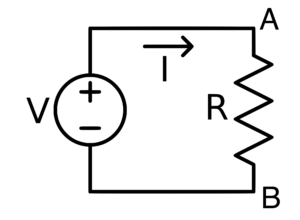 What happens when the battery is in connection with the circuit?

Q.What potential difference is required to do 100 J of work to carry a charge of 10 C between two points?