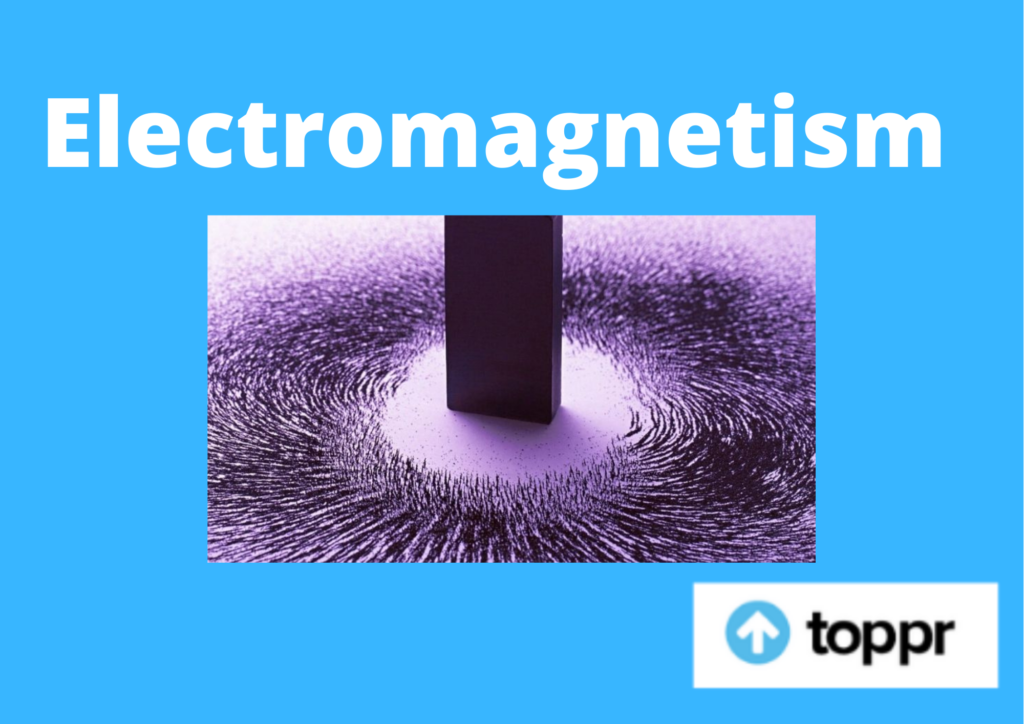 Similarly, it displays electromagnetic fields such as magnetic fields, electrical fields and light. Further, it is the fundamental reason electrons bound to the nucleus and responsible for completing the structure of the nucleus.

Before electromagnetism was invented, people or scientists were of the thinking that electricity and magnetism are two different subjects. However, after James Clerk Maxwell published A Treatise on Electricity and Magnetism in 1873, these views began to change.

In his publication, he stated that the interaction of the positive and negative charges mediate through one force. It was this observation which laid a foundation for electromagnetism. After that, the other scientists like Michael Faraday, Oliver Heaviside, and Heinrich Hertz added their ideas regarding the same.

For instance, if the current (positive charges) moves in a wire, it creates the magnetic field along the wire, and we can determine the direction of magnetic lines and force through the use of Right-hand rule.

Thirdly, we make use of the electromagnetic radiations in the communication system for transferring data from the source to the receiver. Fourthly, we use electromagnetism in industries ranging from small ones to large power equipment at least one stage of their work.

The permanent magnetic speakers which we commonly use in TV’s and radios are the perfect examples of electromagnetic devices. To understand the operation of these devices, we need to know the principle of electromagnetism.

For converting electrical waves into an audible sound, we design these speakers accordingly. Firstly, we attach a metal coil to a permanent magnet. When current passes through the coil, it produces a magnetic field.

Thus, the magnetic fields which form newly repel by the permanent magnetic field which results in the vibrations. Further, the cone-like structure further amplifies these vibrations which cause the sound. So, you see this is how speakers operate.

We refer to this principle as electromagnetic induction. The voltages which outcomes will be on the basis of the speed of the conductor which movies via the electric field. So, the fasted is the conductor’s speed, the greater will be the induced electricity or voltage.

As per Faraday’s Law, the relative motion between magnetic field and conductor, the flux linkage changes and this change in flux induces a voltage across the coil. For instance, the DC generator works on the principle of Faraday’s Law of Electromagnetic Induction.

More About Electromagnetism and Electric Motors

Hans Orsted, a Danish physicist, was the first one for discovering that a magnetic field was created by the flow of electric current.

Some of the electric generators, we can drive by human power like hand crank or a bicycle for producing electricity.

Through the use of electromagnetism, we can turn powerful magnets on and off by using electricity, which does not happen with permanent magnets.

Loudspeakers make use of electromagnets for vibrating the cone and producing sound.

Question 1: How do we define the phenomena of electromagnetic?

Answer 2: Some of the properties of electromagnetic waves are as follows:

Electromagnetic waves propagate by oscillating waves electric and magnetic waves oscillating at right angles to each other. Moreover, they display properties of interference and diffraction. Further, they are transverse waves and travel at a speed of 3 × 108 m/s in a vacuum.