Do you ever think about how much water does our earth have? As per studies, the earth is covered with around 71% water. You can find it in oceans, lakes, rivers and streams. Moreover, it is also stored as groundwater. Similarly, some of the amounts are trapped in ice. It also exists in the atmosphere as water vapour. In other words, all the water which exists on our planet is called Hydrosphere. So, it is basically the water component of the Earth. It is defined as the total amount of water on a planet. It includes the water on the surface of the planet, underground, and in the air. Further, this part of the earth can be liquid, vapour, and ice. 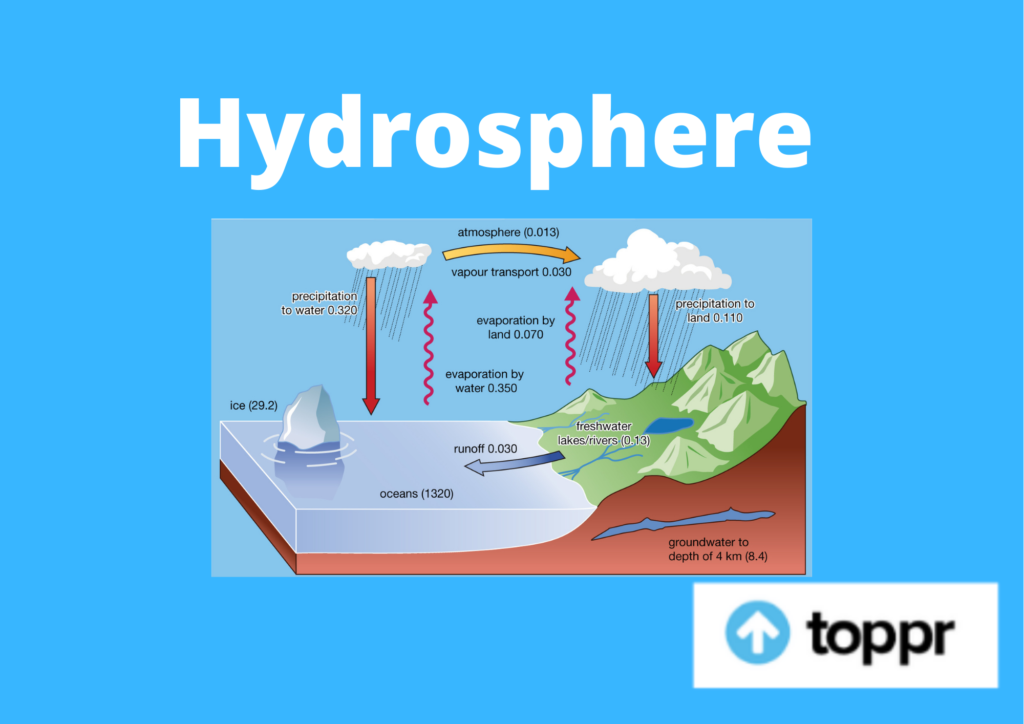 It is the component of the earth which is made up of all liquid water we find on the planet. It comprises of water storage area like oceans, seas, lakes, ponds, rivers as well as streams.

In other words, hydrosphere is quite large as the oceans only cover around 71% of the earth’s surface area. Hydrosphere’s motion and exchange of water between the hydrosphere and cryosphere is the basis of the hydrologic cycle.

Further, the constant movement and exchange of water help in forming currents which move warm water from the tropics to the poles and assist in regulating the Earth’s temperature. So, you see that the exchanging of water is an essential part of the hydrosphere.

Most importantly, the hydrosphere mainly composes of water. In addition, there are also some impurities or addition to it which consist of dissolved minerals, gases and particulates.  We consider some of these to be pollution, while others are significant for the health of ecosystems.

For instance, too much sediment is dangerous to the surrounding ecosystems, whereas insufficient levels of dissolved oxygen in the water result in hypoxic conditions which can pose a threat to ecosystems.

Therefore, a delicate balance is required for healthy ecosystems which surround various components of the hydrosphere. Further, the hydrosphere is always in motion. The motion of rivers and streams are visible, but that of ponds and lakes is less obvious.

Moreover, we can see some motion of seas and ocean with large scale motions that travel water with great distances like poles and tropics or between continents. These types of motions are in the form of currents.

One hardly thinks about the planet’s role in keeping us alive as we take the hydrosphere for granted. The major significance of the hydrosphere is that water sustains various life forms. Further, it plays an essential role in ecosystems and regulates the atmosphere.

Hydrosphere covers all water present on the surface of the earth. It consists of saltwater, freshwater, and frozen water along with groundwater and water in the lower levels of the atmosphere.

Now, we will look at its functions:

Significance of water in cells

Every cell in a living organism is composed of around 75% of water, thus, it enables the cell for functioning appropriately. If we didn’t have water, cells won’t be able to operate normally as life cannot exist without it.

Human beings make use of water in various ways. Drinking water is the most obvious use, but it is we also use it for domestic purposes such as washing and cleaning and in industries. Further, we also use water in producing electricity through hydropower.

Hydrosphere offers a place for multiple plants and animals to live in. A lot of gases such as CO2, O2, nutrients such as ammonium and nitrite(NO–2) and other ions are dissolved in water. The presence of these substances is significant for life to exist in water.

The specific heat of the water is its unique characteristics. This denotes that water requires a lot of time to heat up and a lot of time cool down. It assists to regulate the temperatures on earth as they stay in a range that is acceptable for life on earth to exist.

Any water storage area on the Earth that holds liquid water, we consider it to be a part of the hydrosphere. Because of this, there is an extensive list of formations that make up the hydrosphere including:

Oceans: Most of the water on our planet is salt water, and the vast majority of this saltwater is present in the oceans.

Freshwater:  Freshwater is much less abundant than saltwater, and is present in a variety of different places.

Groundwater: Freshwater stored beneath ground makes up a small portion of the fresh water on Earth.

Glacial water: Water that melts off of glaciers.

As we know humans are having a great impact on the environment, the same is the case with the hydrosphere. It has changed drastically because of water pollution, river damming, wetland drainage, climate change and irrigation.

Further, when we release fertilizers and sewage into water storage areas, it results in eutrophication which causes aquatic environments to be artificially enriched with nutrients.

Excessive algal blooms can cause harmful hypoxic conditions in the water. Acid rain from SOx and NOx emissions from fossil fuel combustion has caused the acidification of components of the hydrosphere, which harms the surrounding ecosystems.

Finally, our activities also change the natural flow of water in the hydrosphere when we divert and dam rivers. In other words, it harms surrounding ecosystems which are reliant on the water source.

Question 1: State the components of hydrosphere.

Question 2: How do humans impact hydrosphere?

Answer 2: Humans are having a great impact on the hydrosphere. It has changed drastically because of water pollution, river damming, wetland drainage, climate change and irrigation.