Aren’t rainbows just the most beautiful natural occurrence in the world? It looks so perfect! Isn’t it? Have you ever noticed you can sometimes see rainbow-like occurrences in a prisms and crystals too? How does this happen? Well, this happens because of a phenomenon known as ‘Dispersion of Light’ alongside refraction. Let us study more in-depth about this below.

Table of content
1 Suggested Videos
2 What is Dispersion Of Light?
3 Prism
3.1 Angle of Deviation:
4 Dispersion of White Light By a Prism
4.1 Browse more Topics under Human Eye And The Colorful World
5 Refraction of Light through a Glass Prism
6 Dispersion of Light and Rainbow
7 Solved Example For You

What is Dispersion Of Light? 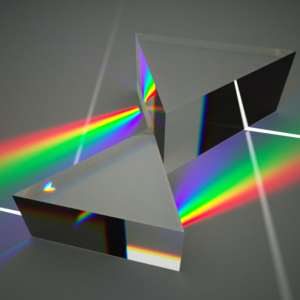 The above picture, looks very pretty, isn’t it? So what is this? What is happening here?

‘Dispersion of Light’ can be defined as the splitting of white light when it passes through a glass prism into its constituent spectrum of colors (i.e. violet, indigo, blue, green, yellow, orange and red). Dispersion figuratively means ‘distribution’ and hence that’s exactly what is happening in the picture above. The white light splits into its constituent colors at various frequencies and various angles. 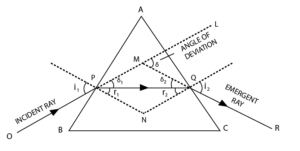 A prism is a transparent refracting device bounded by five plane surfaces inclined at some angles. It bends the light two times and emergent ray is at an angle to the incident ray. Angle of deviation (δ) is the angle between emergent ray and incident ray.

For a single refracting surface, δ=|i−r|

Where A is the angle of the prism. For angle of minimum deviation, δ is minimum and i1=i2=i

Dispersion of White Light By a Prism

Wavelength is inversely proportional to the deviation in the path of the light. Red light suffers the least amount of deviation and violet the most. When a white light is made to pass through a prism, formation of  a spectrum of seven colors occurs showing white light is a combination of seven separate colors.

Prism only acts as a medium for the dispersion of light made of the seven colors. Refraction occurs when the light falls on the prism. The wavelength and frequency of these deviated colors is different, they deviate differently at different angles due to the velocity difference of the prism. The color red therefore deviates the least since it has maximum wavelength and color violet deviates the most since it has the least wavelength.

Learn more about Refraction and Scattering of Light here

Refraction of Light through a Glass Prism

A glass prism has 3 rectangular lateral surfaces and 2 triangular bases, all inclined at an angle. This angle is called the ‘Angle of the prism’. Let’s take a triangular prism with a ray of light entering it. In the figure, D is the angle of the prism.

Dispersion of Light and Rainbow A rainbow is formed when it rains and there’s sunshine simultaneously. Each raindrop is made of a different shape and has a different consistency as compared to a glass prism, still it affects light in a similar fashion. One can see the seven constituent colors (red, orange, yellow, green, blue, indigo and violet) when white light (sunlight) hits a collection of raindrops at a fairly low angle.

When the white sunlight travels from air into the drop of water, the constituent colors of light slow down to varying speed and frequencies. When violet light enters the raindrop it bends at a relatively sharp angle. Some of the light then passes back out into the air, and the rest is reflected back. Some of that reflected light passes out of the drop, bending as it moves back into the air again.

This way, each raindrop disperses the white sunlight into its constituent colors. We see a wide bands of color, as if different rainy areas were dispersing a different single color since we only see one color from each raindrop.

Sometimes we also see a double rainbow, a sharp rainbow with a fainter rainbow above it. The fainter rainbow occurs in the same manner as the sharper rainbow, but here the light is reflected twice inside the raindrop instead of reflecting once. Due to this double reflection, the light exits the raindrop at a different angles, so we see it above the sharper rainbow. And if you observe carefully, you’ll notice that the colors in the secondary rainbow are in the reverse order of the primary rainbow.

Read about Human Eye and its Defects of Vision here

Q. Rainbow is formed due to which of the following?

a. By dispersion of sunlight

b. By scattering of sunlight

c. By reflection of sunlight

Sol: a. By dispersion of sunlight through water droplets present in the atmosphere

A rainbow is a meteorological phenomenon that is caused by reflection, refraction and dispersion of light in water droplets resulting in a spectrum of light appearing in the sky. It takes the form of a multicoloured arc. Rainbows caused by sunlight always appear in the section of sky directly opposite the sun.

Q. For the blue color of the sky, what characteristic property of light is responsible?

Learn Atmospheric Refraction and Scattering of Light to know the answer.