The sight of sunrise and sunset is the prettiest. Isn’t it? But if you notice carefully, you’ll notice the sun appears red during sunrise and sunset. Do you know, why? Well, it’s because of ‘Scattering of Light’. But what does one mean when they say scattering of light? Or, why do stars appear higher than they actually are? Does this have something to do with the scattering of light? Well, the answer to this is ‘No’. Stars appear higher than they actually are because of ‘Atmospheric Refraction’. Now, what is atmospheric refraction? Let us find out below.

Table of content
1 Suggested Videos
2 What is Atmospheric Refraction?
2.1 Browse more Topics under Human Eye And The Colorful World
2.2 Examples of Atmospheric Refraction
2.2.1 a. Twinkling of Stars
2.2.2 b. Sun is visible 2 minutes before the actual sunrise and 2 minutes after the actual sunset
2.2.3 c. Mirage
3 Scattering of Light
4 Tyndall Effect
4.1 Why does the sky appear blue?
4.2 Sun appears red at sunset and sunrise. Why?
5 Solved Example For You

What is Atmospheric Refraction? Therefore, the refraction of light triggered by the earth’s atmosphere is termed as ‘Atmospheric Refraction’.

a. Twinkling of Stars After passing through the earth’s atmosphere having different layers of air with different optical densities, the rays of light coming from the stars finally reach our eyes. But, due to the change in the temperature conditions, the optical densities of different layers of air keep changing continuously. Because of which, the rays of light coming from a star are refracted to different degrees at different moments of time, and the path of refracted rays keeps changing. Hence, sometimes due to the amount of light refracted towards our eyes is more stars appear bright to us, on the other hand sometimes since less light is refracted towards our eyes, the stars appear dim to us. This gives us the twinkling of stars. 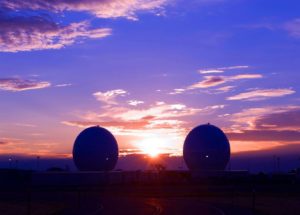 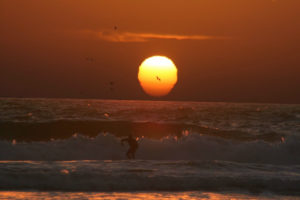 In summers in desserts, due to atmospheric refraction is an optical illusion known as ‘Mirage’ occurs. During the mirage, an object such as a tree appears to be inverted and appears to be on the bank of a pond. On a hot summer day, since the layers of air near earth’s surface become hot, these layers act optically rarer medium.Whereas, the layers of air above the earth’s surface are cooler and therefore act as the optically denser medium. Light, therefore, refracts when it travels through a sudden transition between layers of cold and hot air.

A part of light gets absorbed by the particles of any medium ahead of it’s following radiation in a particular direction when light travels from one medium to another medium. This is called as the ‘Scattering of Light’. During the scattering of light; it in all directions. Tyndall Effect was named after the physicist John Tyndall after discovering it in the 19th century.

Why does the sky appear blue?

Sun appears red at sunset and sunrise. Why?

During the sunset and sunrise, since all the blue light is scattered away already and is out of our sight, the light reaching is red which has a longer wavelength.

Q. What characteristic property of light is responsible for the blue color of the sky?

A clear cloudless day-time sky is blue because molecules in the air scatter blue light from the sun more than they scatter red light. When we look towards the sun at sunset, we see red and orange colors because the blue light has been scattered out and away from the line of sight.
Hence, scattering is the characteristic property of light which is responsible for the blue color of the sky.