The lens is a corrective measure to make people see better. A variety of variables may affect their vision and contribute to one or more conditions. These conditions are generally known as myopia and hyperopia or short-sightedness and far-sightedness. These factors contribute to the formation of different focal points. It makes it harder for the light rays to focus on the retina. The use of special power lenses changes the focal lengths to allow the light to fall on the retina, resulting in better vision. Among different types of lens, concave and convex lens are the most common ones known. Toric lens is also one type of such lenses. 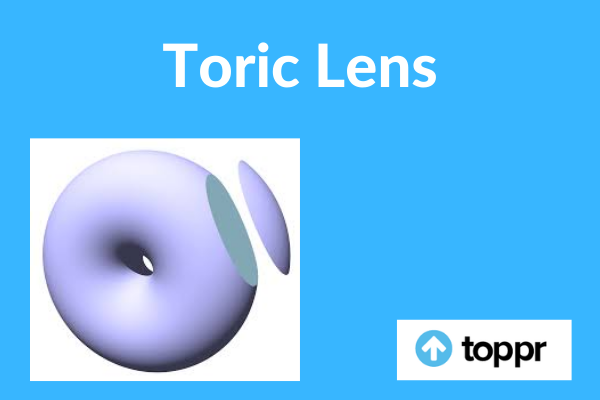 Table of content
1 What is the Toric Lens?
1.1 What is a Torus?
1.2 The Radius of Curvature & Optical Power
1.3 Ray of Light & its Refractive Power
2 FAQs about Toric Lens

What is the Toric Lens?

Toric Lens are a type of lens in which the focal length and the optical strength vary in two directions at 90 degrees from each other.  One side appears like a torus cap, whereas the other side is usually spherical. It is used mainly in eye care, i.e. with an intraocular lens to fix astigmatism in contact lenses, and eyeglasses.

The results are more precise if these lenses are used after an astigmatic surgery. When it comes to the Toric lens vs the Standard lens, their function is very different, but their goal is the same.

What is a Torus?

Visualise a circle with a radius of r, rotating in the axis, and is in the same plane. It is at a distance of R from the centre of the circle. If R is larger than r, a ring-shaped torus will form. If R is equal to r, the opening reduces to a point and a horn torus forms. A spindle torus formation occurs when the R is less than r, which reduces the opening to two dips.

The Radius of Curvature & Optical Power

The largest radius of curvature on the surface of the toric lens is R+r, which can be equivalent to the smallest refractive power S, represented as:

The refraction index of the lens is n in the equation.

The vice versa is also applicable, i.e. when the radius is the smallest the refractive power is the highest. Which gives us:

Ray of Light & its Refractive Power

The beam of light that strikes the torus on the x, y plane is influenced by the refraction of the largest radius of curvature. Thus, it will have minimal refractive power, as discussed before. Whereas, the light rays which enter through the z-axis (axis of revolution) suffer from refraction with the least value of the radius of curvature. That, in return, causes it to have the highest refraction power.

At 90 degrees to each other, this lens has two refractive powers because of the above properties. The light enters from intermediate angles between the axes, the values of the refractive power shifts from higher to lower values or vice versa, which compensates for the eye defects.

Modern technology with, its computer-controlled modelling skills has developed a toric lens that works on the principle of improved correction of vision by deviating from toric shape.

Q.1. What is astigmatism?

Answer. Astigmatism is one of the conditions that occur in a person’s cornea. It is a reflective problem that occurs due to the irregular shape of the cornea or the curvature of the eye lens, but it is fixable with the help of the toric lens.

Q.2. Why are the toric lenses used?

Answer. Certain conditions impact the focal power of the cornea and create visual problems, to adjust the vision. Hence the toric lenses are applied. They are mostly useful to correct astigmatism. It is a condition that allows the vision to be blurred. The irregular shape of the cornea is the cause of astigmatism. Or the curvature of the lens that is present in the eye.

Q.3. How are the regular lens and toric lens different?

Answer. A lens is a simple medical device to correct focal power and, refractive errors occurring in the cornea of an eye. They help to correct such defects by increasing or decreasing the power of focus to the cornea. Likewise, the toric lens is used as an optical device with a focal length and an optical power in two different ways perpendicular to each other.

Toric lenses fix astigmatism symptoms that might appear in the eyes of an individual. In the other hand, regular lenses are for correcting myopia and hyperopia. The focal power of the lenses varies depending on the condition of the cornea.