Hydrostatic pressure refers to the pressure that is exerted, due to the force of gravity, by a fluid at equilibrium at any particular point of time. Furthermore, hydrostatic pressure is proportional to the depth whose measurement takes place from the surface as the increase in weight of the fluid happens. Moreover, this increase in weight happens when a downward force is applied.

Hydrostatic pressure refers to the pressure whose generation takes place by the weight of liquid above a measurement point when the liquid is in a state of rest. Furthermore, the height of a liquid column, of uniform density, is such that it turns out to be directly proportional to the hydrostatic pressure. 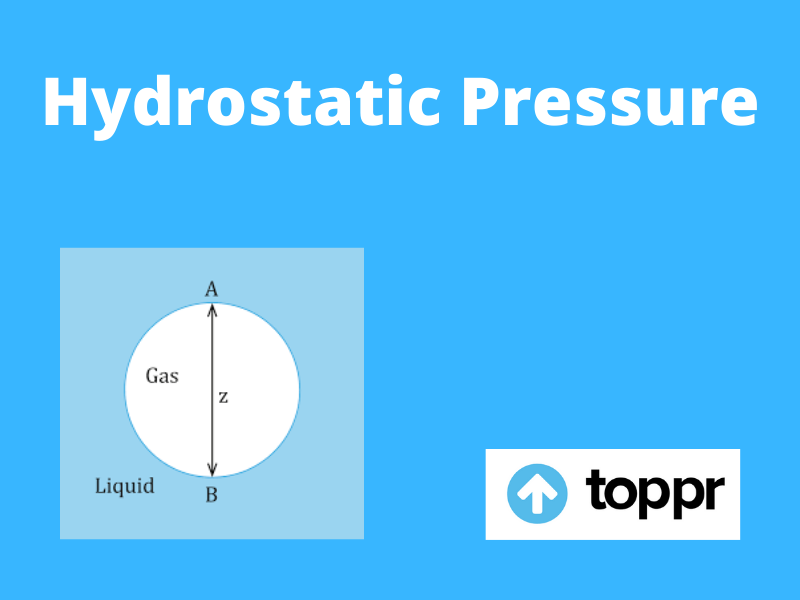 How do we Measure Hydrostatic Pressure?

The consideration of a basic case of a stagnant fluid first takes place, where only weight and pressure forces are significant. Experts define an (x, y, z) coordinate system where the vertical z-axis points upward.

Here, the absolute pressure p is by definition hydrostatic, i.e., p=ph. Calling ρ as the local fluid density and g as the acceleration of gravity, a balance of vertical forces on a fluid element yields the well-known result:

At this stage, p0 is nothing more than a constant of integration that is keyed to a choice of being a z-axis’ origin.

For any function of space (field) f  that one can define in a closed volume V that is bounded by the surface S, Gauss’ divergence theorem give an explanation that

Here, the minus sign in the left-hand-side provides an explanation that the normal n⃗ n→ to S points inward, and ∇f happens to be the f’s gradient. When f=p, the right-hand-side acts as the representative of the pressure force. This force’s exertion is due to the fluid on the body.

Consider a body of volume Vw that is fully submerged in water (density ρw). Moreover, when the application of Eq. (3) takes place in this case with f=p, the determination of the hydrostatic pressure force Fw’s vertical (non-zero) component happens. Consequently, the attainment of the Archimedes’ familiar result is: Fw=ρwgVw.

For floating bodies, the submerged volume Vw gets bounded due to both the waterplane area S0 and the wetted area Sw. This gives a suggestion for the natural choice for the z-axis’s origin at the water surface.

With p0 about an order of magnitude that is certainly larger than ρwg, it becomes not so easy to simply ignore the term that arises from pressure forces. Furthermore, the exertion of these physical forces takes place on S0.

To resolve the issue, consideration must also be made for the dry surface of the body SASA. Furthermore, with little generality loss, one can take the body to be convex, with a dry volume VAVA that is bounded due to SASA and S0S0. In this case, the total volume is V = Vw+VAV = Vw+VA.

Furthermore,  the overall vertical fluid force F turns out to be equal to

where r⃗ r→ happens to be the position vector. Furthermore, after the expansion of the cross products and expressing the pressure via Eq. (2) in both the modes of air and water, only integrands containing znzznz contribute non-zero terms due to the application of Gauss’ divergence theorem. Most noteworthy, we obtain

Let’s consider Cw=(xw, yw, zw) and CA=(xA, yA, zA) to be the volume centroids of VA and Vw, respectively. Now, applying Eq. (3) with f=yzf=yz and f=xzf=xz provides us with the final form as follows:

Following is the Hydrostatic pressure formula which one can use for calculation:

p = ρgh
p is the pressure whose exertion takes place by the liquid in N.m-2, Pawhere,

Derivation of the Formula of Hydrostatic Pressure

Consider a column of water whose total volume is V and the base surface area is A.

The weight of the water is:

We know that the mass of water is just water’s density with volume X. Therefore,

Volume is the product of the height and surface area. Therefore,

By using the formula of pressure:

Question 1: What is the pressure acting on the water at a depth of 1m at 4°C?

The formula whose use takes place is: p = ρgh

Answer 2: A hydrostatic pressure example can be a water tower with an elevated tank that is, via pumps, filled with water. Due to the resulting hydrostatic pressure, the water can be forced into the households that are low-lying without the need for additional pumps.