Experts define Lorentz force as the combination of the magnetic and electric force. Furthermore, this force acts on a point charge due to electromagnetic field.

Lorentz force explains the equations of mathematical nature along with the physical importance of forces which act on the charged particles. Moreover, these particles travel through space which contains electric and magnetic field. 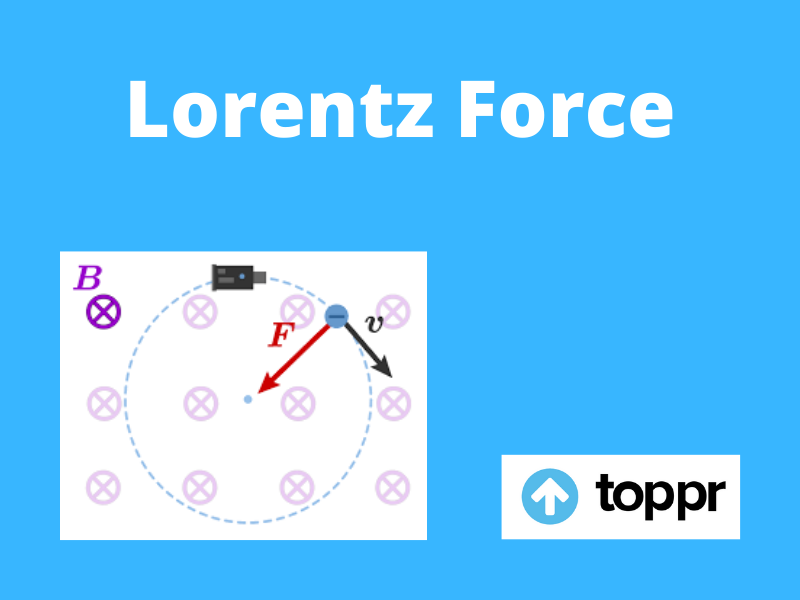 How do we Measure Lorentz Force?

Lorentz force happens when the movement of a charged particle takes place through a magnetic field and cuts through field lines in the process. This force acts at right angles to both the particle velocity, v, and the magnetic field, B.

These are held at right angles to each other and a rotation takes place so that:

There is an alternative way of remembering the left-hand rule that involves using the acronym “FBI” to label your fingers. As such, “I” refers to the middle finger, “F” refers to the thumb, and “B” refers to the first finger.

Holding these three fingers at right angles to each other would show the relationship between the directions of the current I, force F, and magnetic field B.

Lorentz Force on a current-carrying wire that is present in a magnetic field:

Lorentz Force by Making Use of Vector Notation

Using vector notation, the force which acts on a moving charge, q, in a magnetic field, B​, is expressed as:

In accordance with the rules of vector notation, this means that F​ should be at right angles to both  B​ and v and making use of the right-hand screw rule would provide us with the correct direction for F​.

The formula of Lorentz Force

Derivation of the Formula of Lorentz Force

The size of the Lorentz Force is expressed as:

If the movement of the particle takes place in the direction of the magnetic field, without cutting across any field lines, theta, equals, 0,θ=0 and there would be no Lorentz Force that acts on the particle.

If the particle is moving perpendicular to the magnetic field, sinθ=1, the particle will come under circular motion with a radius r. Furthermore, the determination of r can take place by equating the centripetal force and the Lorentz force:

Lorentz Force on a current-carrying wire that is present in a magnetic field:

This is another way of Lorentz force derivation. For N charged particles, each with a charge q and having a movement at the speed v. Furthermore, its movement takes place along a wire at an angle theta,θ, to a magnetic field of strength B. Therefore, the total force on the wire would be:

The expression of the magnitude of the current travelling down the wire I is as:

where n happens to be the number density of free electrons in the wire. Moreover, A refers to the wire’s cross-sectional area and v refers to the speed of the electrons along the wire. Also, the magnitude of an electron’s charge is e.

Finally, we get the equation for the magnitude of the force that acts on the wire:

Lorentz Force by Making Use of Vector Notation

It is possible to derive this force in vector form. So, the force that acts on a moving charge q, in a magnetic field  B,​ can be expressed as:

The expression of the Lorentz force on a current-carrying wire in a magnetic field B​ can take place in vector notation as:

where dl​ happens to be an infinitesimal displacement that takes place along the wire. Furthermore, B​ refers to the magnetic field at the relevant point. Also, the integral is taken over the wire’s entire length.

Adding the force which acts on a charged particle due to an electric field F​=qE​ would give a total Lorentz force on a particle of:

Question 1: What is meant by Lorentz force?

Answer 1: Lorentz force refers to a combination of magnetic and electric force that happens because of electromagnetic fields.

Answer 2: This force explains the mathematical equations in an appropriate manner. Furthermore, it explains the physical importance of forces that act on the charged particles.